Following a convincing display against Tranmere Rovers in the FA Cup this past weekend, Tottenham Hotspur will gear up for yet another cup tie when they face Chelsea on Tuesday.

This will be the first leg of the EFL Cup semifinal and the Lilywhites will hope to go into the second leg with an advantage.

Lucas Moura has been ruled out after sustaining a knock in the FA win over Tranmere. The Brazilian joins Victor Wanyama on the sidelines.

Jan Vertonghen, meanwhile, is nearing his return to full fitness, although Mauricio Pochettino has confirmed he won’t feature against Chelsea. Eric Dier, Mousa Dembele and Erik Lamela are all doubts.

Pochettino is likely to revert to the 4-2-3-1 formation that will see the return of Toby Alderweireld. The Belgian will be deployed at the heart of the Tottenham defence, alongside Davinson Sanchez.

Kieran Trippier, meanwhile, will replace Serge Aurier, who appeared as a wing-back against Tranmere while Danny Rose should get the nod ahead of Ben Davies on the opposite flank. The Welshman was deployed as a centre-back against Arsenal in the previous round.

Hugo Lloris will return to the side, after sitting out against Tranmere. The Frenchman is in good form, having conceded just three goals in his last six league matches. He also managed to a shutout against Arsenal during the quarterfinals of the EFL Cup.

With Tottenham likely to miss out on several key midfielders this week, Dele Alli is almost a guaranteed starter. The English international will operate as the lone attacking midfielder in Spurs’ 4-2-3-1.

Alli will be supported by the midfield duo of Moussa Sissoko and Harry Winks, who should come into the side, with Oliver Skipp making way.

However, Winks certainly needs to be much more proactive during defensive phases while Sissoko’s work-rate would be crucial in dealing with the exceptionally talented midfield trio of Chelsea.

Pochettino will look to get the most out of Heung Min-Son before he departs for the Asian Cup later this month. Thus, we can expect the South Korean international to retain his place in the starting line-up.

Son is in splendid form at the moment, having been involved in 13 goals in his last nine Premier League matches. He will be deployed as the left-winger with Christian Eriksen occupying the opposite flank.

The duo will look to provide additional support to central striker Harry Kane, who was given a breather against Tranmere. 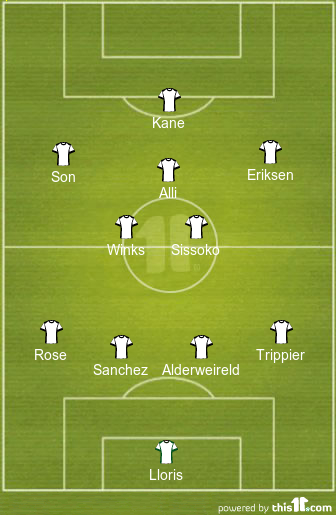