Tottenham Hotspur will look to make it two wins in two games when they face Watford in the third round of the EFL Cup tonight. The North Londoners ended a run of three defeats in all competitions with a win over Brighton last weekend and will target a Cup run despite their limited resources.

Watford, on the other hand, are winless in the last couple of matches, after initially starting the season pretty well. They did beat Tottenham the last time the two sides faced each other and will look for a repeat of that result.

Tottenham will be boosted by the return of Dele Alli but will still be without the services of first choice keeper Hugo Lloris, who is suffering from a muscle strain. Additionally, they will also miss Juan Foyth and Vincent Janssen through injury while Moussa Sissoko has been deemed doubtful.

With Hugo Lloris out injured, third choice keeper Paulo Gazzaniga will be given another chance to impress.

Mauricio Pochettino, as usual, will rotate his defensive backline with Jan Vertonghen starting alongside Davinson Sanchez in central defence while Serge Aurier and Ben Davies could be deployed as the fullbacks, replacing the duo of Kieran Trippier and Danny Rose.

Davies, in particular, will have a point to prove after struggling to perform against Inter last week. The left-back was often dispossessed of the ball, largely thanks to an intensive pressing scheme from Inter, and Watford might adhere to the same principle tonight.

Victor Wanyama will make his first start of the season, lining up alongside Harry Winks at the base of Tottenham’s 4-2-3-1. The former Southampton midfielder spent a long time on the sidelines and will be itching to get back into action.

Elsewhere, Dele Alli will return to his former stomping ground as he initially made his breakthrough at the MK Stadium with his former club MK Dons. The English international will be deployed out wide along with Erik Lamela while Eriksen will feature as the lone playmaker.

The Tottenham attack will be led by Fernando Llorente this week, replacing Harry Kane, who will be given a breather. The Spaniard hasn’t had too many chances since joining Tottenham and needs to put in an impressive performance. Kane has seen a lot of game time and though his form is slightly worrying, perhaps he deserves a rest after the summer he had. 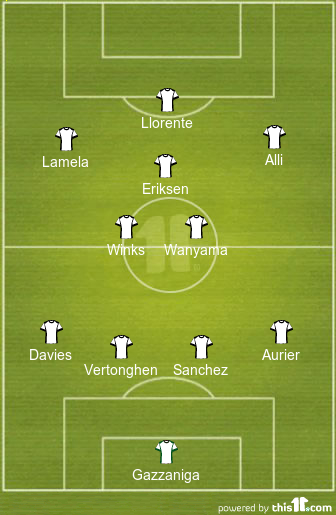