Manchester United dropped points against Wolverhampton Wanderers in their last Premier League match. However, they will be keen to proceed further in the Carabao Cup when they line up against Derby County tomorrow. Derby are managed by Jose Mourinho’s former player Frank Lampard with the ex-England international taking over as their manager this summer.

Marcus Rashford will serve his final game of the 3-match ban he had received. Marcos Rojo is not training with the team as the Argentine hasn’t recovered from his knee injury. Ander Herrera and Matic are back for selection in what will come as a boost for the inconsistent United team.

Sergio Romero is likely to start between the posts for Manchester United after a lengthy injury layoff that kept him out of the preseason and the initial few matches of the season too.

Diogo Dalot was impressive in his debut against Young Boys last midweek and is expected to start at right-back again. Dalot provided four crosses in that match and that is something the United strikers will look to capitalise on as the season progresses.

Ashley Young is likely to step in place of Luke Shaw. He was influential against Watford and Jose will look for more of the same.

Phil Jones and Eric Bailly could form the centre-back partnership. Bailly has been out of action ever since his horrendous performance in the shock loss against Brighton. Jones, too, had limped off in the second half in United’s loss to Tottenham Hotspur. However, both of them could be given a chance to prove their mettle yet again.

Scott McTominay might get a start as the holding midfielder and will be expected to shield the backline.

Brazilian new recruit Fred could be the dynamic outlet of this setup. Fred’s ability to induce creativity and forward-thinking mentality at the middle of the park would be crucial to stitching the side together.

He scored once and came very close to notching a second goal in the draw against Wolves a few days ago. Andreas Pereira could complete the midfield trio.

Alexis Sanchez will be in contention to lead the line through the middle and Jose is likely to find ways to help Sanchez rediscover his form in front of goal. The Chilean was underwhelming against Wolves and he was substituted in the second half having recorded an abysmal passing accuracy of 69.7%.

Anthony Martial’s direct, mercurial nature as a winger could help United unlock Derby’s well-drilled backline. Juan Mata might get an opportunity to play on the right and will look to make the most if given the opportunity. 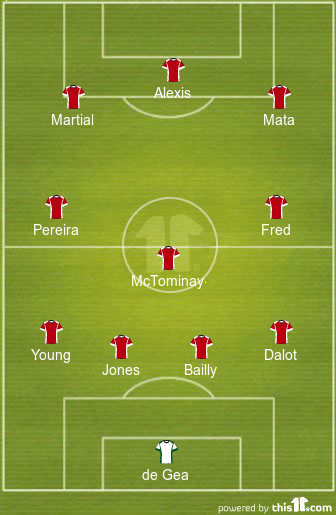