After receiving a thrashing by neighbours Manchester City in the League Cup, Manchester United welcome bottom-dwellers Norwich City to Old Trafford on Saturday.

The Red Devils have lost three of their last six games in all competitions, and have to win against the Canaries this weekend to keep up with their top-four rivals.

Ole Gunnar Solskjaer’s side have been inconsistent this season, with injuries to key players not helping their cause.

The last time Manchester United and Norwich City played in the league, the Red Devils registered a confident 3-1 win.

Jesse Lingard is out for this weekend’s game with an illness, joining the likes of Scott McTominay and Paul Pogba on the sidelines.

Central defenders Marcos Rojo and Axel Tuanzebe will miss the game, but Eric Bailly and Timothy Fosu-Mensah are on the road to recovery and will play for the reserves; they won’t be available for the weekend.

Let’s take a look at the possible Manchester United lineup for the game against Norwich City:

David de Gea played in the League Cup loss to Manchester City; he should retain his place in the Manchester United team. The custodian has been a bit patchy of late, and he will have to be a lot more assertive in the coming months as United can’t afford to make any mistakes.

Phil Jones and Victor Lindelof played last time around, and they were given a right run around by City’s attack. Harry Maguire may be fit for this weekend’s game, and if he is, he will replace Phil Jones in defence and play alongside Victor Lindelof in the Manchester United team.

Brandon Williams could retain his left-back spot in the Manchester United lineup ahead of Luke Shaw, while Aaron Wan-Bissaka should continue at right-back.

Fred and Andreas Pereira started in midfield last time around, and they were overrun by City’s midfielders. Pereira even conceded an own goal; he should drop to the bench with Nemanja Matic replacing him.

Jesse Lingard was poor once again against Manchester City; Juan Mata could replace him in the side to play in the No. 10 role. Pereira is an option as well, but after his performance mid-week, he may not get a look in.

Anthony Martial missed the Wolves game through illness and was a late substitute against Manchester City. He should return up front for Manchester United, with Marcus Rashford starting on the left.

Mason Greenwood could retain his place in the Manchester United attack, moving from the central role to the right flank. 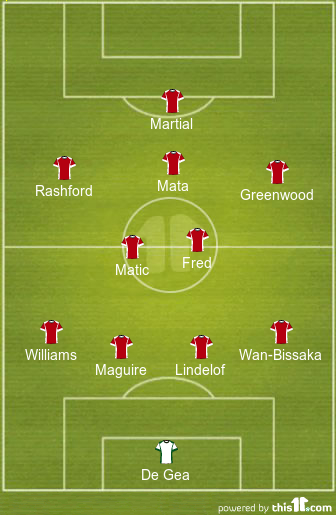 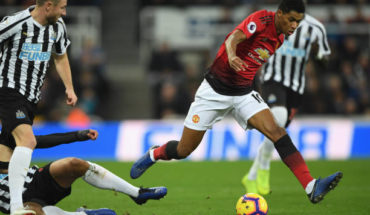