Arsenal will travel to the Bramall Lane on Monday as they are scheduled to face Sheffield United in their next Premier League fixture.

Unai Emery’s troops have made a decent start to their season as they are placed third in the standings after having collected 15 points from 8 games so far.

However, there are many areas wherein they must improve in the coming weeks in order to cement their place in the top four for the foreseeable future.

Alexandre Lacazette is back in full training and a late call will be made by Emery regarding his participation. Emile Smith Rowe has recovered from his injury and will be available for selection.

However, Reiss Nelson is still out with a ligament injury on his left knee which he sustained while playing against Standard Liege. Notably, some international players will return on Friday and will be assessed upon their arrival.

Bernd Leno is set to start in goal as usual as he is the undisputed first-choice custodian at the moment. The German shot-stopper has pulled off some outstanding saves this season to save the blushes of his side on multiple occasions.

Rob Holding could come in for Sokratis and the English defender is expected to feature alongside David Luiz in central defence. Meanwhile, Kieran Tierney and Calum Chambers are likely to start as the full-backs in the Arsenal lineup with minor doubts over Sead Kolasinac’s physical readiness to feature.

Chambers’ progress so far this campaign has undoubtedly been exciting to watch. The 24-year-old made 4 tackles and won 1 aerial duel while plying his trade against Bournemouth before the international break and deserves to start.

Emery is likely to persist with Granit Xhaka and Matteo Guendouzi in central midfield. While Xhaka has been prone to errors, Guendouzi has steadied the ship on a number of occasions.

Meanwhile, Dani Ceballos could start as the central attacking midfielder as Emery looks to go on the offensive. The Spanish international has shown flashes of brilliance every now and then but has to be consistent in his endeavours to make his loan spell a successful one.

Pierre-Emerick Aubameyang is set to lead the Arsenal lineup against the Blades. The former Borussia Dortmund attacker has been one of the best players this season for the Gunners, having plundered 7 goals in 8 league appearances.

Further, Bukayo Saka and Nicolas Pepe could see the green light to start on the flanks. Pepe has huge expectations riding on his shoulders following his £72million move from Lille and has to find form soon.

Lacazette is likely to be introduced from the bench in the latter stages as he works his way back to match sharpness. 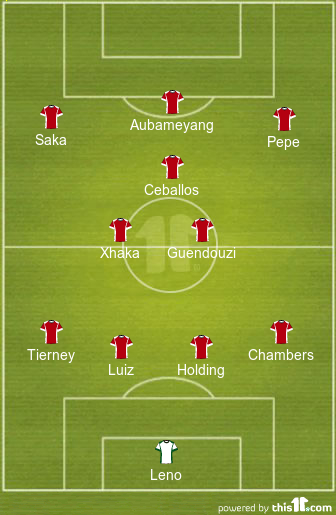