After their hard-fought 1-0 win against Partizan Belgrade on Thursday night in the Europa League, Manchester United switch their focus towards Norwich City in the Premier League.

The Red Devils travel to Carrow Road after a solid performance against league leaders Liverpool last weekend. United’s away form in the Premier League has been woeful, and they will hope to change their fortunes on Sunday night against a Norwich side that beat Manchester City earlier in the season.

Paul Pogba, Luke Shaw, Diogo Dalot, and Nemanja Matic have missed the last few games, and it would be a surprise if any of those players start against Norwich. Let’s take a look at the possible Manchester United lineup for the game against Norwich City.

David de Gea did not travel with the Manchester United squad for the trip to Belgrade in the Europa League. But, the Spanish goalkeeper should return to the team against Norwich City.

Ole Gunnar Solskjaer could retain the 3-4-1-2/3-4-2-1 formation that he has used in the last two games, which means that Harry Maguire – who captained United against Partizan – will start alongside Marcos Rojo and Victor Lindelof against Norwich. Lindelof was an unused substitute in the Europa League game, while Maguire and Rojo played the entire 90 minutes.

Ashley Young should continue in his left wing-back role in the Manchester United lineup, while Aaron Wan-Bissaka – who started and played around 60 minutes mid-week – should play at right wing-back for United.

Paul Pogba is still out and we aren’t quite sure what his current injury situation is as Solskjaer hasn’t revealed much about his ace midfielder’s fitness. If he is passed fit, he will most likely be on the bench.

Fred was an unused substitute against Partizan, but he should come into the Manchester United lineup in place of James Garner, with the Brazilian starting alongside Scott McTominay.

Anthony Martial started the game against Partizan and played 60 minutes. He could get a start in the Premier League, starting alongside Marcus Rashford and Daniel James in attack.

Rashford could play off the left, while James plays from the right, with Martial the central striker. If Martial is not chosen, Jesse Lingard or Juan Mata could start for the Red Devils. 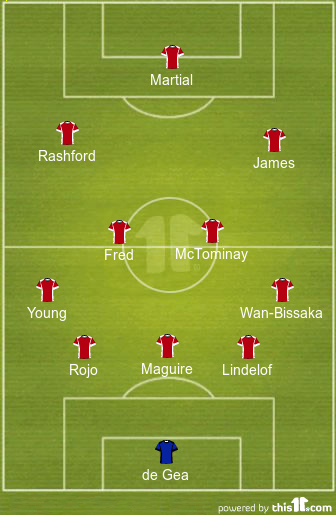