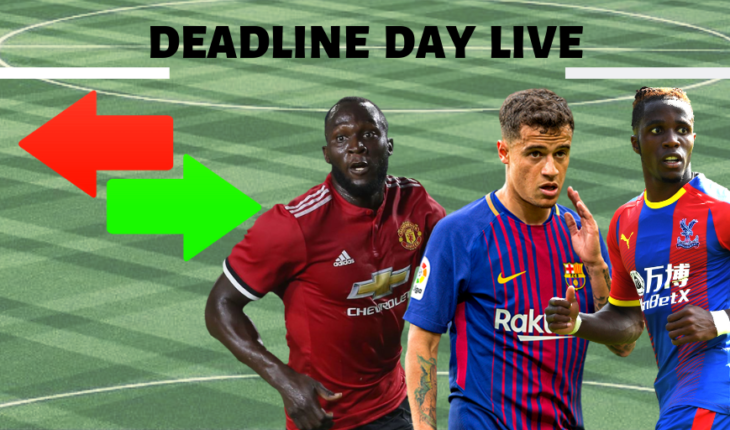 Catch all the latest transfer news from the 2019 transfer deadline day LIVE featuring the sides from the Premier League, Championship, Scottish Premiership, and all the other leagues in Europe.

The transfer window is now closed in England!

Here are all the confirmed deals on deadline day…

Confirmed deal: Tottenham have confirmed that Giovani Lo Celso has signed in a long-term deal.

Confirmed deal: Burnley have signed Danny Drinkwater on a loan deal until January from Chelsea.

Confirmed deal: Watford have signed Ismaila Sarr for a club-record €35 million. he has signed a five-year contract with the Hornets.

Confirmed deal: Newcastle United have re-signed Andy Carroll, who was a free agent, on a one-year contract. Pay as you play contract from the looks of it.

Confirmed deal: Arsenal have announced the signature of Kieran Tierney from Celtic for a fee of £25 million.

Welcome to The Arsenal, @kierantierney1 👋

Confirmed deal: Aaron Mooy signs for Brighton and Hove Albion on a season-long loan deal after extending his contract with Huddersfield Town.

Tottenham have rejected Watford’s bid for the left-back. Looks like he will remain in north London, even though the club now have three options in total to choose from at left-back.

“Our transfer window was checking options, thinking about it and making decisions.”

The Belgian will reportedly earn £300k a week, and has signed a five-year contract with Inter. Conte’s side have forked out £73 million for his signature – a club record.

Just in: Wilfried Zaha is to remain at Crystal Palace with very little time left for him to move and a replacement to arrive at Selhurst Park.

It’s unlikely the Red Devils will make an attempt to sign any other player having failed in their attempts to sign Mario Mandzukic earlier today.

Ryan Sessegnon to be announced as a Tottenham player

The versatile full-back has signed a five-year deal with the north London outfit.

Looks like the centre-back will remain in north London as AS Roma haven’t really forced the issue. With time running out, it’s unlikely Spurs will let him leave as they don’t have enough time to sign a replacement.

Danny Drinkwater passes his medical at Burnley and will sign on a season-long loan deal.

Just in: Juventus will not be selling Mario Mandzukic to Manchester United.

Manchester City will not pay a loan fee to sign Scott Carson from Derby County. Discussions ongoing for his wages.

With Zaha angling for a deadline day move, Crystal Palace could make a late move for RB Leipzig attacker Augustin.

The club are hopeful of striking a season-long loan deal with Chelsea for the midfielder.

The Premier League side haven’t given up hope and have launched a bid of €30 million, but it’s up to Kessie to decide if he wants to move or not.

Wilfried Zaha isn’t training with Crystal Palace as he looks to move on deadline day. Arsenal and Everton said to be in the mix.

The Canaries had made a €16.5 million bid for the attacking midfielder.

Confirmed: Nathan Redmond signs a new contract with Southampton that will keep him at St Mary’s until 2023.

With Leeds United deciding to go after Eddie Nketiah, Rangers need to match Liverpool’s asking price for Kent. Unlikely that he will move on loan again.

Everton will have to spend £25 million to sign Rojo on deadline day.

Reason for Tottenham’s break down in talks with Dybala

The club couldn’t come to an agreement for the player’s image rights, so it’s unlikely they will pursue the deal.

Some deadline day action at Brighton

The Seagulls have confirmed a deal for former PSG defender Romaric Yapi.

The forward is a free agent after his contract came to an end with West Ham. Latest reports claim a return to Newcastle is still possible.

Jack Colback to go on another loan spell?

Confirmed deal: Newcastle United sign Emil Krafth for a fee of around £5 million. He has signed a four-year deal.

Why is Luiz moving to Arsenal on deadline day?

The Mirror claim that the Brazilian has had a fallout with Frank Lampard, who didn’t enjoy the smoothest of relationships back in 2013. They were seen arguing on the pitch after a Europa League game against Rubin Kazan. A bit odd to be bringing such an old dispute back.

The Magpies are set to make a late £14 million bid for the Bordeaux winger.

The Reds have allowed Taiwo Awoniyi to join Bundesliga side Mainz on a season-long loan.

Looks like Dybala will not be moving to Tottenham on deadline day as news is emerging that Juventus will not sell the attacker.

Well, it’s been an exciting yet strange deadline day. Back goalkeepers tend to be older.

Kieran Tierney is in London for his medical

A fee of £25 million has been agreed between Arsenal and Celtic. It’s a busy day in north London.

Philippe Coutinho has a new suitor

Bayern Munich are the latest club to be linked with Coutinho as they are unsure of the severity of Leroy Sane’s injury last Sunday. Sane was their prime target.

Just in: David Luiz is undergoing his medical at Arsenal! That’s one move no one saw coming.

Tottenham are working to resolve the issues related to Dybala’s image rights. The fee will be €70million plus add ons. Quite a team with Dybala in attack!

Seems like Villa have secured McGinn’s future at the club. He has signed a new five-year deal with the club.

Everton to move in for Marcos Rojo

Manchester United’s move for Harry Maguire means there will be one or two departures from Old Trafford, and Rojo could be one of them with Everton interested.

Just in: Arsenal’s Eddie Nketiah will sign for Leeds United in a season-long loan deal

The PSV winger is also attracting interest from Sevilla. Watford will have to move in quick though.

The young full-back will have a medical with Tottenham. The fee is £30 million.

Luiz will join Arsenal for a fee of £8 million. The Brazilian will sign a two-year deal with the Gunners. Busy day ahead at the Emirates.

The German star has been linked with a move to Wolves and Arsenal, and it remains to be seen who he will choose. He is expected to leave Juventus today.

Manchester United back for Mario Mandzukic

The With Lukaku closing in on a move, Manchester United are expected to make a move for Juventus forward Mandzukic.

Confirmed: Illan Meslier has signed for Leeds United on loan from FC Lorient, and the Whites have the option to sign the custodian permanently come the end of the season.

Romelu Lukaku was greeted by some 200 fans in Milan as he finally arrived to complete his move from Manchester United to Inter Milan. Big transfer deadline day ahead, folks!

Just In: Manchester United have reached an agreement with Inter Milan for the sale of Romelu Lukaku.

Saido Berahino has been released by Stoke City

Once a promising young player at West Brom, Berahino’s career has stagnated. He had more than three years remaining on his contract with Stoke City, but has left the club on a mutual agreement.

The talented winger will spend a season on loan under former Hammers boss Slaven Bilic at West Brom.

Looks like Neres will be staying at Ajax. The Brazilian was linked to Manchester United, but has extended his Ajax contract till 2023.

Antonio Conte’s side have offered €70 million + €13 million in add ons for the Belgian outcast. Offer is currently being considered.

With Kurt Zouma seen as an important player by Frank Lampard, Everton have been forced to look at other options. Negotiations have begun for Tomori.

The Arsenal player has been linked with a host of clubs, but it seems he is likely to end up at Elland Road, as per David Ornstein.

Crystal Palace’s asking price for Wilfried Zaha is…£80 million. He had earlier handed in a transfer request.

Xherdan Shaqiri to remain at Liverpool

James Pearce has confirmed that the Swiss winger will not be sold by Liverpool so late in the transfer window.

The Canaries have largely refrained from spending big this summer, but have reportedly launched a €16.5 million bid for the Lorient attacking midfielder.

He won the golden boot in the Russian league last season with CSKA Moscow, and Palace are keen on signing him before the window closes. That’s a substantial raise from their previous bid. Read about it here.

The Frenchman is undergoing his medical at Everton ahead of his move to Goodison Park.

Reports in France claim that the Brazilian wants to move to, wait for it, Arsenal! Rumour is that he refused to train this morning.

Confirmed: Danny Welbeck has joined Watford. He was a free agent after his contract with Arsenal came to an end in July.

Just IN: Crystal Palace attacker Wilfried Zaha has handed in a transfer request!

Manchester United linked with a shock move for Fernando Llorente

The Spaniard is now a free agent after his contract with Tottenham came to an end, and has been linked with a move to Old Trafford. Not a bad plan B at all.

Arsenal haven’t given up on Daniele Rugani

The Gunners have launched a second loan bid for the Italian, with an obligation to buy Rugani for €30 million.

Koscielny opens up after joining Bordeaux

“It is not up to me to speak about it. I am focused on the match on Saturday. I don’t need to speak. I have huge respect from Arsenal, I showed this respect on the pitch.”

But did you show the same respect off the pitch in the last month or so, Laurent?

Former LiverpoolEcho and current Athletic journalist James Pearce has said it’s ‘highly unlikely’ that there will be any transfer business at Liverpool.

The Barcelona man has been linked with Tottenham, but has reportedly turned down a loan move to north London. Remains to be seen if he will move or stay put at Camp Nou.

Confirmed: Norwich City have sign Ibrahim Amadou from Sevilla. The midfielder is the Canaries’ fifth signing of the summer.

Everton’s season-long loan deal for Smalling has been turned down by Manchester United. The England international is being seen an important player by Solskjaer.

The Sky Blues are waiting for news on Danilo’s medical as they have struck a deal for the Brazilian to move the other way. They will also fork out £27 million, so it’s an expensive player plus cash deal.

Nabil Fekir’s €30 million move to Real Betis is complete as he was unveiled earlier in the Betis kit.

With Lukaku edging closer to an exit, Manchester United are looking to sign Dembele soon, and have already made a bid. Read more about it here.

Everton have had their bid for Arsenal’s Alex Iwobi rejected

Marco Silva will have to fork out more money as Arsenal have rejected Everton’s £30 million bid for Iwobi. Everton are far from done here.

Harry Maguire to wear No. 5 shirt

Manchester United’s newest signing, and the most expensive defender in the world will be donning the no. 5 shirt soon on the pitch.

Martin Skrtel, remember him Liverpool fans? The Slovakian could move to Atalanta this summer, and is already in talks with the Serie A side.

Tottenham’s bid for Dybala has been accepted by Juventus. Gianluca di Marzio is claiming that the north London side will pay €70 million for the attacker. Read more about it here.

Latest reports from the Athletic claim that Manchester United will make a move for the Dane should they sell Lukaku for a fee of £70 million.

So Sampdoria want £24 million for the Belgian midfielder. Leicester are expected to match the asking price considering they have the money to spend, and Brendan Rodgers wants the player.

Romelu Lukaku’s exit from Manchester United looks likely, with the Athletic UK reporting that the Belgian could now sign for Juventus. The Old Lady will receive the money from Paulo Dybala’s sale.