Chelsea face Manchester United for the third time this season as the Blues need a win to fend off Tottenham Hotspur’s challenge at the top. The fact that Spurs played a day earlier than the Blues and picked up the win will increase the pressure on Antonio Conte to mastermind a win over Jose Mourinho’s men. They are unbeaten in both the games against Manchester United earlier this season with the Blues winning 3-0 at Stamford Bridge in October while also beating them 1-0 in the quarterfinals of the FA Cup.

The West Londoners are looking to do a double over Manchester United for the first time since the 2009/10 season. Chelsea are also unbeaten against the Red Devils in their last four attempts but it will be tough for Conte’s men to beat them this time around as Manchester United are on a 21 game unbeaten run at the moment. Right here, let’s take a look at the predicted Chelsea lineup in their tricky away tie against Manchester United.

Thibaut Courtois will be up against David de Gea on Sunday as two of the best custodians in the world go head to head. The Belgian has been in fine form for the Blues this season and keeps Asmir Begovic on the bench.

Cesar Azpilicueta and Gary Cahill have been playing in a back three this season like they have been since their academy days. Such has been their mastery of the nuances of playing in Conte’s favoured formation. Joining them will be David Luiz who has been playing through the pain barrier for a long time. He has had an issue with his knee since December after that horrible lunge from Sergio Aguero on the Brazilian.

Victor Moses returned into the playing eleven in the 3-1 win against Bournemouth after missing the two games before the last week. He will be deployed as the right wing back whereas Marcos Alonso will be the left wing back with the former Bolton Wanderers player proving his worth for the Blues in his second stint in the Premier League.

N’Golo Kanté has been colossal for Chelsea this season and is on course to win back to back league titles in England. He takes up a place in midfield alongside Nemanja Matic who has to fight against Cesc Fabregas for a place in the first eleven and emerges victoriously against the Spaniard for a place in the starting lineup. United are a threat on the counter and considering they have an in-form Ibrahimović, we could see Matic taking up the role of nullifying the Swede.

Diego Costa has not been among the goals since the turn of the year but the Chelsea manager is expected to keep his faith in the club’s top scorer this season. Eden Hazard will take up his favourite left-wing position accompanied by Pedro on the right. The likes of Willian, Michy Batshuayi and John Terry have to be satisfied with a place on the bench. 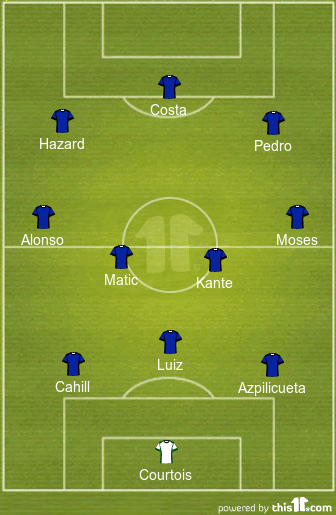