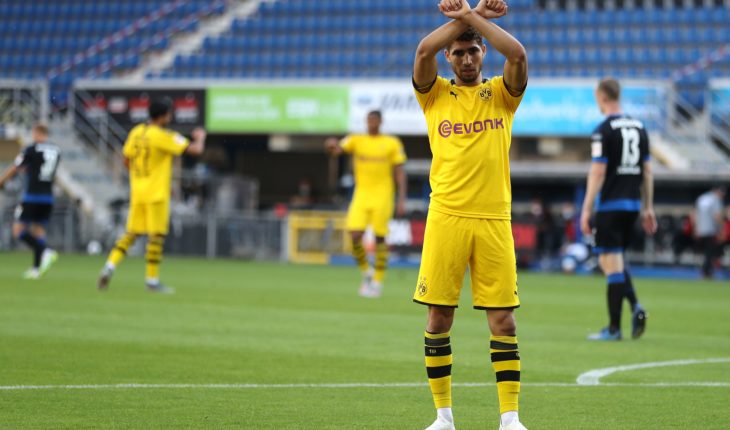 Manchester City could pursue a move for Real Madrid full-back Achraf Hakimi, who is currently on loan at Borussia Dortmund. Hakimi is currently in the second year of his two-year loan spell at the German club.

As per AS (via Daily Mail), a host of clubs are interested in signing Hakimi, including Manchester City. Madrid reportedly want £54 million for Hakimi, and City are willing to pay the fee. The likes of Chelsea and Arsenal, as well as Dortmund, are keen on signing the 21-year-old defender. Hakimi has played 71 times for Dortmund, scoring 12 goals and providing 17 assists in two seasons for the club.

His current deal with Real Madrid expires in 2022.

Pep Guardiola wants a new right-back at Manchester City, as he has apparently lost faith in Joao Cancelo, who was signed from Juventus last year. Kyle Walker has been decent, but is prone to the odd error in the full-back position, while he has also turned 30, which means that Guardiola will need a younger replacement for him at the club.

Achraf Hakimi has impressed immensely for Dortmund in his two-year loan spell, showing tremendous quality going forward, while also being decent defensively. The Moroccan is a modern full-back who likes to bomb forward at every opportunity, using his pace and dribbling ability to push the opposition onto the back foot. Hakimi is primarily a right-back but has played on the other side at left-back, while also playing further forward on the right side.

He has averaged 2.2 dribbles per game in the Bundesliga this season – quite a high number for a full-back. He is also a good passer of the ball, which would please Guardiola, who likes his defenders to hold on to the ball and build attacks from the back with passes along the ground.

Achraf Hakimi also impresses defensively, as he uses his pace and strength to make tackles and interceptions. The Real Madrid man is the perfect Pep Guardiola full-back and is one that could blossom at Manchester City if given the time. Hakimi could offer competition to Walker at the right-back position, while his versatility means that he could also play further forward as a winger for Manchester City.

While we can safely say Hakimi will be a decent option for City, it is understood any potential move hinges on the outcome of their appeal against the two-year UCL ban. In case of any adverse ruling, Joao Cancelo could be given another year to prove his credentials and that particular transfer could still work out well for both parties.