Many expected the inconsistent Tottenham Hotspur side to improve under new manager Jose Mourinho. Spurs fans were hopeful, since Mourinho has made himself synonymous with trophies. He started out well as Spurs won two consecutive Premier League games after his arrival – something that they hadn’t done previously this season.

However, the period of joy and festivity was not a long one. Soon Tottenham returned to their old self, and the problems got exposed. They are now without a victory in their last four league games. Mourinho is desperate for a win, and so are their next opponents Norwich City. Though the Canaries won in the ‘battle of the back-benchers against Bournemouth, Spurs will be a different kettle of fish.

The last game between the two sides ended at 2-2. Christian Eriksen and Harry Kane scored for Spurs. Mario Vrancic opened the scoring for Norwich, whereas Serge Aurier scored an own goal.

Jose Mourinho is dealing with a number of significant injuries. Harry Kane, Moussa Sissoko and Hugo Lloris are long-term absentees while Ben Davies remains out.

Tanguy Ndombele has recovered from his injury and is expected to make an appearance.

Paulo Gazzaniga is error-prone, but Mourinho doesn’t have many alternatives.

Hence, Gazzaniga is expected to be in goal against Norwich City.

Japhet Tanganga has impressed in Spurs’ colours in the last couple of games and has been rotated with Jan Vertonghen in the left-back spot.

But having failed to score in 3 consecutive games, Jose might opt for the slightly more adventurous Ryan Sessegnon on that flank in defence.

Davinson Sanchez’s pace holds him in good stead for a start while Toby Alderweireld is a certain pick in the Tottenham lineup.

Jose Mourinho is highly unlikely to change his preferred 4-2-3-1 formation.

There are a couple of players who could be handed a breather against the basement dwellers. Which means a start for Christian Eriksen is forthcoming in central midfield while any one of Eric Dier, Harry Winks and Tanguy Ndombele might start alongside him.

Dele Alli, despite his woeful recent displays, is likely to be persisted with, in the no.10 role in the Tottenham lineup.

With Harry Kane sidelined with a thigh injury till at least the last week of April, Troy Parrott is the only genuine striker Jose Mourinho has in his squad. However, the Portuguese is unlikely to play the teenager.

Brazilian attacker Lucas Moura is expected to play as a makeshift striker in the Tottenham lineup while Lo Celso and Heung-Min Son should start on the flanks. 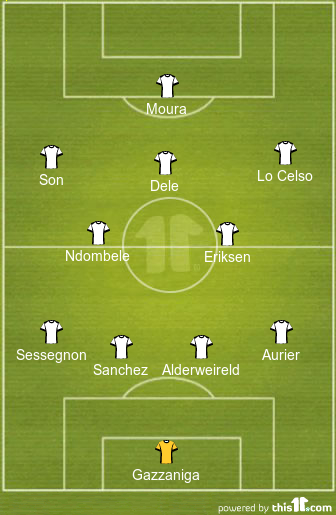