Manchester United begin their FA Cup campaign on Friday evening by hosting Everton at Old Trafford in the third round.

The Red Devils are in excellent form heading into the FA Cup clash, having won six games in a row across all competitions. They go into this game on the back of a comprehensive 3-0 win over Bournemouth in the Premier League, thereby, strengthening their grip on a top-four spot in the standings.

Having won all four of their games since returning to action following the World Cup, Erik ten Hag’s side are firm favourites on paper against Everton, who are fighting against relegation in the Premier League and head to Old Trafford off the back of a 4-1 home loss to Brighton on Tuesday.

Donny van de Beek will be missing due to the serious injury that he picked up against Bournemouth, but Anthony Martial should be available to face Everton despite suffering a knock.

Antony missed the win over Bournemouth in the Premier League with a slight injury but he was spotted in training with his teammates on Wednesday morning. Meanwhile, Jadon Sancho remains out for some time due to his ongoing fitness problems.

David de Gea produced a couple of really good saves against Bournemouth to keep his clean sheet intact. The Spaniard has been in great form this season and should don the gloves again for Man United.

Due to a quick turnaround between fixtures, Erik ten Hag may choose to rotate his squad against Everton. Diogo Dalot and Lisandro Martinez made their returns against Bournemouth as substitutes but may find themselves in the starting XI on Friday evening. 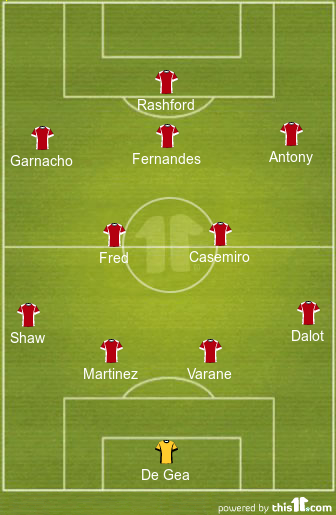 Raphael Varane was rested against Bournemouth, so the Frenchman should be fresh to face Everton. He should be tasked with marshalling the troops from the back. Luke Shaw was excellent on Tuesday, scoring a fine goal in the 3-0 win over Bournemouth. He should again get the nod at left-back over Tyrell Malacia.

Casemiro has taken Man United’s midfield to another level with his passing, tackling, reading of the game and experience. He is likely to start, with Fred replacing Christian Eriksen in the double pivot.

The Brazilian duo of Casemiro and Fred will look to take control of the game from the first minute against Everton. Bruno Fernandes makes Ten Hag’s team tick with his creativity, vision and energy, and the Portuguese playmaker is a certainty to start in the FA Cup tie.

Scott McTominay and Christian Eriksen will be waiting for their opportunities on the bench as they try to make an impact when called upon.

While Anthony Martial should be fit to start against Everton, Ten Hag is unlikely to take a risk with the Frenchman. Instead, he may go with Marcus Rashford up top, with Alejandro Garnacho and Antony providing flair and creativity from wide areas.

Rashford is in red-hot form at the moment and will be licking his lips at the prospect of facing a leaky Everton defence.