Chelsea travel to France to play Lille in their second match of the group stage of Champions League 2019-20. The Blues will want to get their first points on the board in the Champions League after losing their opening match against Valencia.

The English side may be without a few key men, but manager Frank Lampard may be optimistic about his side’s chances after their last two wins in the current season.

Antonio Rüdiger is still out of action due to a groin injury and will not be fit for the game against Lille. French centre back Kurt Zouma is also a doubt having missed the last game due to illness. He could possibly make the bench for the Champions League game.

N’Golo Kante could return to the Chelsea squad for the trip to France, but we are not yet sure if he’s fit enough to start the game.

Let’s take a look at the possible lineup that Lampard may put out against Lille:

Kepa will start in goal for the Blues, having played all games for the side apart from the one League Cup game.

Andreas Christensen and Fikayo Tomori, who started against Brighton in mid-week, will start in defence for the Blues on Wednesday night.

Marcos Alonso will retain his place at left-back as Emerson is still out with an injury, while captain César Azpilicueta will start at right-back in the Chelsea lineup.

We could see the midfield three of Jorginho, Mateo Kovačić, and Mason Mount for the game against Lille if Kante isn’t fit enough to start the game.

Kovačić was a substitute in Chelsea’s game against Brighton in the Premier League this past weekend, but he will most likely return to the side.

Mount has been in great form this season, and he could start on the left of the Chelsea three, while Jorginho – who scored a penalty in the last game – will be the man dictating the tempo of the game in midfield.

Tammy Abraham has been in spectacular form in the Premier League and he will want to take that form to the Champions League as well. He will start up top, alongside Pedro, and last weekend’s goalscorer, Willian, in attack. 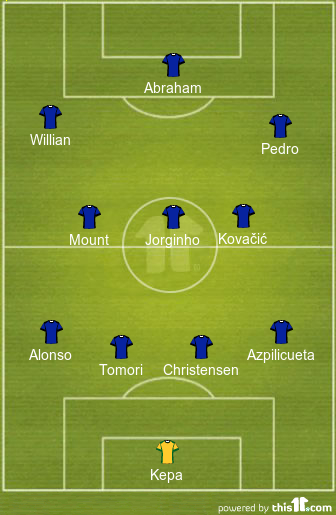