Chelsea will take on Southampton this Sunday after their 2-1 away win in Lille in the Champions League. Frank Lampard’s men have won their last three games in all competitions, and will hope to register another win this weekend.

The Blues are 7th in the Premier League table with 11 points from seven games, and are three points away from third-placed Leicester City.

Their opponents on Sunday, Southampton, have lost their last two Premier League games and are 14th in the league, four points away from Chelsea.

Lampard could maybe make a few changes to his team after the mid-week clash. Let’s take a look at Chelsea’s predicted lineup:

The Blues are still without the trio of Emerson, Antonio Rudiger, and Ruben Loftus-Cheek, who are nursing injuries.

Kepa started in the Champions League as well as last weekend’s win against Brighton, and he will continue in goal for the game against the Saints.

Lampard played a back three against Lille, and he could maybe continue that formation against Southampton, who could also line-up with three centre-backs in defence. Fikayo Tomori, Kurt Zouma and César Azpilicueta played as the three central defenders against Lille, and we could see Zouma be replaced by Andreas Christensen in the Chelsea lineup.

Reece James, who started at right wing-back against Lille, could continue in that position, while Marcos Alonso will also retain his place at left wing-back as Emerson is still out with an injury.

N’Golo Kante returned to the Chelsea lineup against Lille, and played the entire 90 minutes. He could retain his place in the team and start alongside Jorginho in midfield.

Ahead of them, Mason Mount could maybe be given a rest for the clash against Southampton, having played 10 games already this season. We could see Callum Hudson-Odoi replace Mount on the left side of attack.

Willian had a good game against Lille in mid-week, scoring the second goal for Chelsea. He could once again start from the right side for the Blues.

Tammy Abraham, who has been in spectacular form this season, added another goal to his tally, scoring Chelsea’s opener against Lille, which was also his first Champions League goal. He will is expected to start as the forward in the Chelsea lineup come Sunday. 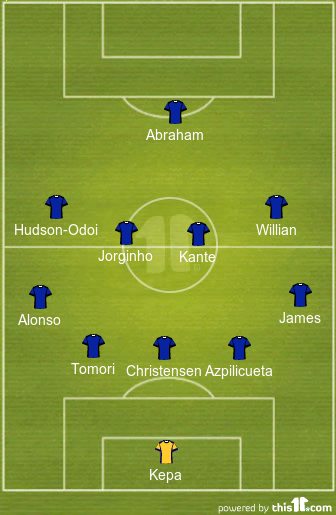