Leeds United have become a bit inconsistent in the Championship of late, having managed just one win in of their last three games. In their last game against Derby County at home, the Whites were undone by a stoppage-time goal, with the match ending 1-1.

Marcelo Bielsa’s team are still top of the Championship table, level on points with Swansea City, but three teams are just a point behind them in the table.

Bielsa’s team face Charlton Athletic, who are managed by former Leeds midfielder Lee Bowyer. Let’s take a look at the possible Leeds United lineup for the trip to The Valley:

Tyler Roberts is unavailable, and it’s unlikely that Adam Forshaw will feature.

Kiko Casilla is an ever-present fixture in the Leeds United side and he will continue in goal for the Whites against Charlton Athletic.

The centre back pairing of Liam Cooper and Ben White has been strong in defence, with Leeds conceding just 4 goals in 8 games.

White has played all 8 games and has been very impressive in his first season for Leeds, while Captain Cooper has missed just one game this season. The duo will continue at the back for Leeds.

Luke Ayling has played two under-23 games following his return from injury, but Bielsa may not want to put him in the team yet which means that Stuart Dallas will continue at right-back.

Ezgjan Alioski has performed well at left-back in the absence of Barry Douglas, who came on last time around against Derby. Alioski could also retain his place in the team for the game against Charlton.

Leeds missed the influence of Adam Forshaw in midfield last time around as the 27-year-old has missed the last two games through injury.

If he doesn’t return for the game against Charlton, we could see an unchanged midfield three of Kalvin Phillips, Mateusz Klich, and Jamie Shackleton.

Bielsa could perhaps make some changes in attack for the game against Charlton. Patrick Bamford could make way for Eddie Nketiah as the lone striker, while Helder Costa could come in for Jack Harrison on the left.

Pablo Hernandez has been very good this season and he will retain his place on the right. 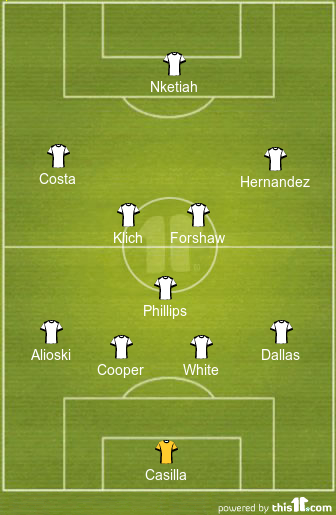