Premier League rivals Tottenham Hotspur and Manchester United will face off in an International Champions Cup match in Shanghai. Spurs won their previous pre-season match against Juventus 3-2, thanks to a wonder goal from Harry Kane in the dying minutes of the game.

The London club have two more pre-season games following the match against the Red Devils on 25 July, as Mauricio Pochettino’s men will face off against Real Madrid and Inter Milan before their first match in the Premier League against Aston Villa.

Let’s take a look at the team that Pochettino might put out against Manchester United on Thursday.

Tottenham captain and No. 1 Hugo Lloris has returned to England following an illness and didn’t feature in the first game of pre-season against Juventus. Paulo Gazzaniga will start between the sticks for Spurs against United.

Despite being linked with a move away from Spurs and with just one year remaining on his contract, Toby Alderweireld featured against Juventus, and will most likely play once again, and could partner Juan Foyth at the heart of the defence.

The absence of Danny Rose and Ben Davies means that Jan Vertonghen could play at left-back or youngster Anthony Georgiou, who played in that position against Juventus can also be handed another chance. At right-back, we could see another youngster in Kyle Walker-Peters, who also started against Juventus.

Spurs’ club-record transfer arrival Tanguy Ndombele could get his first start for the club against Manchester United, and he could be joined by Oliver Skipp and Dele Alli in midfield, with Alli playing the furthest forward. Pochettino played the trio of Alli, Winks, and Skipp against Juventus, with 18-year-old Skipp impressing. We could maybe see more of the teenage midfielder in pre-season.

Spurs’ most important player Harry Kane, did not start against Juventus but could do so against Manchester United. Son Heung-min will most likely start from the left and could get a lot of support from the local South Korean population. Troy Parrott, who also had a good game for Spurs against Juve like Skipp, could perhaps get another start for Spurs, on the right. 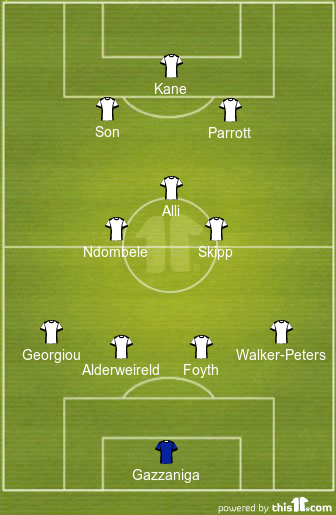