Manchester City will look to continue their domestic domination while attempting to progress further in the elusive Champions League.

Last year Pep strengthened his ‘Centurions’ team with the signing of Riyad Mahrez which was more of a luxury than a necessity. But this time around things might be different.

Vincent Kompany has left the club while Nicolas Otamendi is also linked with an exit. Along with them, we might also see the departure of Danilo, who is keen on more playing time which Pep does not seem prepared to give him.

This brings us to the two most strongly linked players to City. Two players who are unsurprisingly defenders. One a centre-back while the other being a fullback, a position Pep is bent upon perfecting.

Leicester City defensive superstar Harry Maguire is City’s prime target to bolster their defence while Joao Cancelo has been earmarked as Danilo’s potential replacement and one to challenge Kyle Walker for a starting position in the lineup.

Read More: Why Manchester City Should Stump Up £50m For Joao Cancelo

In this article, we will ponder over how the City lineup will look if the Sky Blues indeed land their top 2 targets.

Ederson is the undisputed choice between the posts for City.

Our first change is in the right-back position. Kyle Walker’s inconsistent form in the last season and as we witnessed in England’s loss to the Netherlands has led to a fall in his stocks and we believe Cancelo is being targeted as the direct competition for Walker and not just as a replacement for second choice Danilo.

The central defence will also see a new face in case the move goes through. Harry Maguire, who has predominantly played as the left centre-back is likely to be City’s right centre-back alongside the ever dependable Aymeric Laporte alongside him.

Oleksandr Zinchenko has surely played his way to the top of the pecking order for the left-back spot.

READ MORE: Why Harry Maguire Is The Perfect Player For Manchester City

There is unlikely to be too many changes in midfield and attack for the Sky Blues.

Fernandinho, Kevin de Bruyne and Bernardo Silva are the ideal candidates to take up the 3 midfield slots. Ilkay Gundogan, Phil Foden and David Silva will be second in line.

In attack, we see a more prominent role for Leroy Sane on the left-flank while Raheem Sterling will play the majority of the season on the right with Sergio Aguero leading the line. 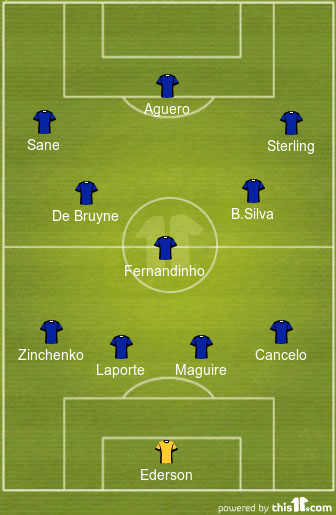