Leeds United are a draw and win away from the Premier League after securing an important 1-0 win at Derby County last Saturday in the first leg of the Championship play-off semi-final. Kemar Roofe scored the only goal to give Marcelo Bielsa’s men the win. The two teams will battle it out once again in the second leg on Wednesday night at Elland Road.

Leeds not only have the upper hand in the tie with the 1-goal lead but also in head-to-head battles, having defeated Derby County thrice this season. The Whites also lost just 5 of their 23 games at home this season in the Championship.

Who might start in Leeds United’s final home game of the season? Let’s find out.

Kiko Casilla will continue in goal for Leeds United and will hope he has a quiet game similar to the first leg. Derby County did not register a single shot on goal in the first leg of the play-off.

Gaetano Berardi and Liam Cooper started for Leeds United at the heart of the defence and did a good job of keeping the Derby strikers at bay. They may start in defence once again if Pontus Jansson is not cleared by the medical staff. Luke Ayling had a solid match at right back and will continue there once again, while Stuart Dallas will start at left back.

Leeds United suffered another injury to a key midfielder as Adam Forshaw, who replaced Tyler Roberts is out of the second leg with a knock. Mateusz Klich and Kalvin Phillips will start in midfield, and 19-year-old Jamie Shackleton could join them. Shackleton made his first-team debut this season and is a player who’s tenacious with good pace to offer.

The wingers for Leeds United against Derby County will most likely remain the same with Pablo Hernández on the right and Jack Harrison on the left.

Leeds United will also miss Kemar Roofe, who was their goalscorer in the first leg, due to injury. Roofe will be a big loss as he has scored 3 goals in the last 4 games against Derby County. Patrick Bamford, who was suspended for the first leg, will replace Roofe in the team. 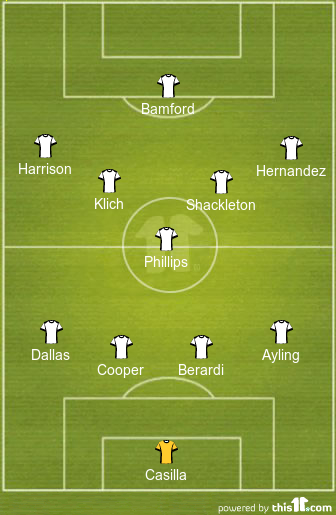