Everton will welcome high-flying Wolverhampton Wanderers to the Goodison Park tomorrow. Wolves are coming on the back of 3-0 decimation of West Ham United but will come up against a home team who have won 2 of their last 3 games in the Premier League.

Everton are currently 8th in the table but face the prospect of dropping down to 12th in case they fail to win any point and other results go against them.

Marco Silva hasn’t yet managed to convince the fans as well as the owner and he will be desperate for his players to put on a good show in front of the home fans.

The Toffees have been inconsistent but during their better phases, there has been a fluidity and inventiveness in the play which has become synonymous with their Merseyside rivals.

Silva has the players and has the pedigree to bring the best out of the talented individuals at his disposal. And he will see this clash against a competitive Wolves team as an opportunity to kickstart a run of positive results.

Lucas Digne had a forgettable 16 minutes against Huddersfield Town, seeing red after coming on as a substitute. He will miss this game along with Phil Jagielka and Yerry Mina who are out injured. Leighton Baines and Idrissa Gueye will face late fitness tests.

England goalkeeper Jordan Pickford will take his usual place in goal. He can expect a busy evening with Jimenez in prime form at the moment.

Seamus Coleman should start at right-back while Leighton Baines is expected to overcome a slight rib injury and start as the left-back with Digne suspended.

Yerry Mina has been ruled out which should result in Michael Keane and Kurt Zouma carrying on as the centre-back pairing. The Chelsea loanee will be eager to string in a few consistent displays and a strong showing against an in-form Wolves attack will go a long way in boosting his confidence.

Andre Gomes has been silky with his touches and movements in midfield but needs to start having more of an impact overall. He has a single assist in the Premier League and more is expected from a player of his calibre.

With Gueye a doubt, Tom Davies might start alongside the Portuguese in midfield. He will be given more freedom and his work-rate and eagerness to press the opposition will come in handy.

Richarlison is expected to start on the left once again. He has 10 goals in the league and will back himself to add to his tally after his winner against Huddersfield Town. Gylfi Sigurdsson is not far behind with 9 goals and 3 assists and he will once again be a crucial cog in Everton’s attack.

Ademola Lookman has looked good since recovering from his injury and we think he might edge out Bernard from the starting eleven while Cenk Tosun is likely to lead the attack. 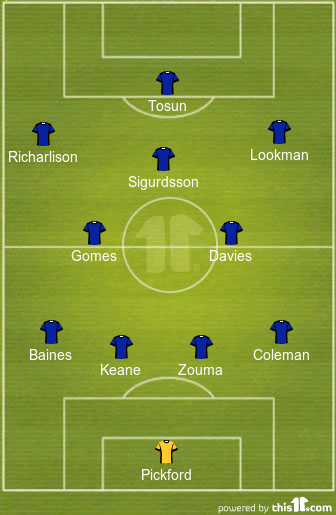 Taking Viagra with a nitrate drug read, and one that affects women across the age spectrum.