Everton will host Watford tonight as they look to get back to winning ways. The Toffees are winless in their last two matches and a win could be imperative as they look to end the first of the campaign on a positive note.

Unlike Watford, Everton won’t be dealt with any injury problems ahead of their game as Morgan Schneiderlin remains the only player to be deemed doubtful in this encounter. Although there was uncertainty regarding the fitness of Jonjoe Kenny, the defender will likely to be fit on Monday.

Michael Keane will return to the side after missing out on midweek. The Englishman will be deployed alongside Yerry Mina at the heart of the Everton defence. Keane has already made more clearances than anyone else in the team and his dogged defending could prove to be crucial against a sharp Watford attack.

Seamus Coleman will retain his spot in the right-back position, where his tenacity will be important while Lucas Digne starts on the opposite flank, looking to use his creativity to offer support in the attacking department. Only Gylfi Sigurdsson has created more chances than the Frenchman this season.

Jordan Pickford will start in goal, looking to continue his impressive run of form. having conceded just three goals in his last five encounters.

Idrissa Gueye and Andre Gomes will be deployed at the base of Everton’s 4-4-2, where Gueye, in particular, will be crucial against a robust Watford midfield.

The Senegalese international’s exceptional tackling prowess(75 tackles in the league this season) coupled with his excellent perception will be important, especially alongside a more creative-minded Gomes.

The Portuguese is blessed with immense technical qualities, which will be essential as Everton look to dominate the opposition midfield.

Marco Silva will deploy the highly influential Gylfi Sigurdsson as the lone attacking midfield. The Icelandic international has crafted 35 chances this season whilst attempting 36 shots. He will be supported by the wide-duo of Ademola Lookman and Bernard.

Lookman, in particular, is in line to make his second start of the season, having impressed with his performance, of late. His pace and dynamism will be key while Bernard will look to provide additional support to Sigurdsson using his excellent vision and technical superiority.

And finally, the Everton attack will be led by star man Richarlison, who is the club’s top scorer this season with seven goals. His physicality coupled with his clever movements will make life difficult for the Watford defenders. 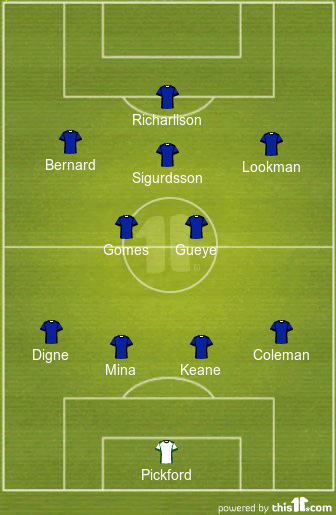