According to reports from The Sun, newly appointed Arsenal head coach Unai Emery is preparing a move for Sevilla midfielder Steven N’Zonzi as he hopes for a reunion next season. The former PSG manager signed the former Blackburn and Stoke City star for Sevilla in 2015 and is known to be a long-term admirer of the Frenchman.

N’Zonzi played under manager Unai Emery for one season before the Spaniard left for PSG in 2016. Currently tied to a two-year contract with Sevilla, N’Zonzi has been linked with a host of clubs in the past few years but a move never materialised.

However, with Unai Emery keen on bringing him back to England, a move to Premier League could soon be on the horizon for the French international. The addition of N’Zonzi could be a good addition considering Arsenal’s midfield problems in recent seasons.

Following the departure of Francis Coquelin, Arsenal currently lack the presence of a robust defensive midfielder with Granit Xhaka being utilised as more of a number eight. In addition, Mohamed Elneny’s career in England has been topsy-turvy, meaning the acquisition of a top-class defensive midfielder is imperative for the North-London giants this summer.

Considering Unai Emery’s tactical philosophy, the presence of a quality defensive midfielder is very important for the Spaniard as he often looks to contaminate the opposition in the middle. The 46-year-old used the likes of Adrian Rabiot and Thiago Motta wisely during his time with PSG and Arsenal will be no different.

However, Granit Xhaka definitely isn’t an answer in the defensive midfield spot. Therefore, the Gunners should certainly make a move for Steven N’Zonzi this summer.

Known for his robust tackling and impressive aerial abilities, N’Zonzi is a complete package in the CDM position. His sheer physical prowess coupled with his aggression, is something Arsenal have been missing for a long time now. The former Stoke City midfielder can help Arsenal assert their dominance, ultimately making them a lot stronger in the midfield department.

Furthermore, the midfield partnership of Aaron Ramsey, Steven N’Zonzi and Granit Xhaka will definitely be something to look forward to. While N’Zonzi’s defensive traits will help Arsenal remain solid in the middle third of the pitch, the likes of Xhaka and Ramsey can make the Gunners much more fluent in ball circulation and chance creation in the final third.

That being said, however, Arsenal will likely have to flush out a lot of cash in order to acquire his services next season, especially with new Sevilla boss Pablo Machin reportedly insisting that the Frenchman will remain in La Liga side next season. 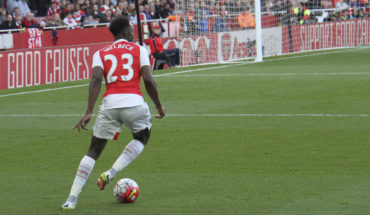