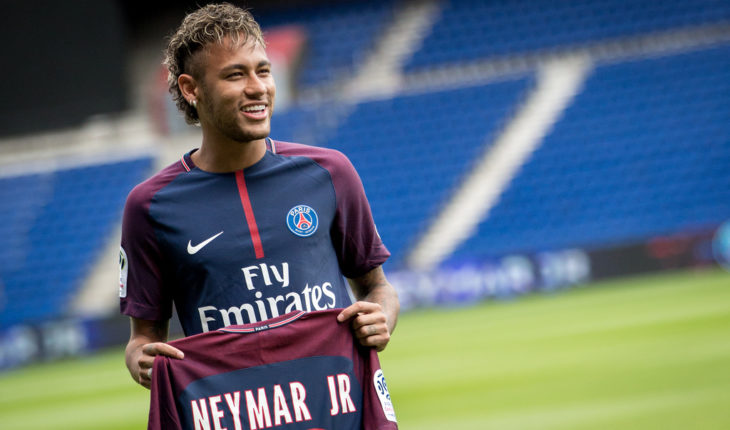 Manchester United may yet lift the FA Cup trophy this season but Jose Mourinho will know that his side are miles behind English Champions and neighbours Manchester City at the moment. Though the Portuguese tactician has revealed that he will not spend big this summer, he is looking to add quality to his first team and might make one sensational signing before the start of the next season.

One such name exciting many United fans is Neymar Jr.

Manchester United Ready To Break The Bank For Neymar:

The most expensive player in Europe at the moment, Neymar Jr, made a sensational move to PSG from Barcelona just last summer. But fall outs with Edinson Cavani and manager Unai Emery have seen him constantly linked with an exit. Real Madrid are reportedly confident of landing him this summer but The Mirror now claim that Manchester United have joined the race for his signature.

According to the story, Jose Mourinho is ready to offer over £200m for his services and is also ready to meet his £30m-a-year wage package, which might be enough to land him. So is this deal possible?

What Will He Bring To Old Trafford?

With 28 goals and 16 assists in 30 starts for PSG this season, Neymar has shown that he is capable of racking up the numbers even outside Spain. The French giants have very little competition for the top flight title but the manner in which Neymar has gone about with his business is awe inspiring.

His dribbling and vision are right up there with the best and though he has weaknesses, is a player that will walk into every top team in Europe.

The Red Devils have a plethora of talent in their ranks with the likes of Anthony Martial, Juan Mata, Jesse Lingard, Marcus Rashford and Alexis Sanchez all fighting for places on the wings. Neymar, with all his goal-scoring prowess, will be expected to walk into the first team, on his preferred left wing, leaving Sanchez to play through the middle.

Romelu Lukaku will continue to lead the line, while the others battle for a spot on the right wing. This will add another dimension to a Manchester United attack that has looked pale for most of this season.

But Can United Land Him?

Neymar quit Barcelona to be a star around which his team his built. PSG have given him such a chance but their early exit from Champions League and lack of domestic competition gives Neymar very little opportunity for growth. He may win the league title every season, breaking records on his way, but he will have to work really hard to be regarded as the best in the world.

He has the ability to do the same in even the toughest of competitions, and if he can repeat that feat at Manchester United, there will be very few that can doubt his status as one of the best players in Europe.

Real Madrid will be on his mind, but having played for The Catalan giants across the country, he might prefer not to dig himself a hole there, making United’s move possible.

There is still only an outside chance that The Red Devils can land him but do you think he will have an immediate impact in England?