After their 0-2 loss at the hands of Fulham, Leeds United are due to entertain Sunderland at the Elland Road on Saturday. Leeds United are now placed at the 13th spot in the league table, having collected 53 points from 40 games. The Whites are really struggling under the tutelage of Paul Heckingbottom but they must back themselves to earn all three points against the Black Cats.

Heckingbottom is likely to be bereft of the services of Liam Cooper, Adam Forshaw, Kemar Roofe and Laurens De Bock. A late call is expected to be made on the selection of Eunan O’Kane and Matthew Pennington as both have had scans and are doubtful for the fixture after having limped off the pitch against the Cottagers. Meanwhile, Conor Shaughnessy, Luke Ayling and Tyler Roberts are the long-term absentees.

Here is how we expect Heckingbottom to roll out his starting XI against Chris Coleman’s entourage.

Bailey Peacock-Farrell fared well in the clash against Slavisa Jokanovic’s men and can hardly be blamed for having conceded a couple of goals. He is likely to be stationed under the bar yet again.

Amidst the current defensive crisis, Heckingbottom might be compelled to opt for Paudie O’Connor for filling his central defence and the 20-year-old is expected to be partnered by Pontus Jansson. Gaetano Berardi might be chalked at the right-back slot, with Vurnon Anita likely to get the nod to start from left-back.

Forshaw’s absence is indeed a big blow for the Yorkshire based outfit as he was proving himself to be a staggering player after his move from Middlesbrough in the summer. Doubt persists over O’Kane as well and thus, Ronaldo Vieira and Kalvin Phillips might be partnered in central midfield to cushion the back line and to knit the side together with their passes.

Samuel Saiz has plundered 5 goals and has also registered 6 assists from 29 appearances in the Championship and the Spaniard is likely to operate from the no.10 slot to render his creative prowess in the final third. He has been an influential figure for Leeds United and he will look to finish the season strongly.

Caleb Ekuban had a disastrous outing at Craven Cottage and Heckingbottom is expected to replace him with Pierre-Michel Lasogga to cater to his side’s striking needs. For the Peacocks, Ezgjan Alioski is expected to be pencilled at the right-wing whereas, from the left-wing, Pablo Hernandez is expected to showcase his calibre. 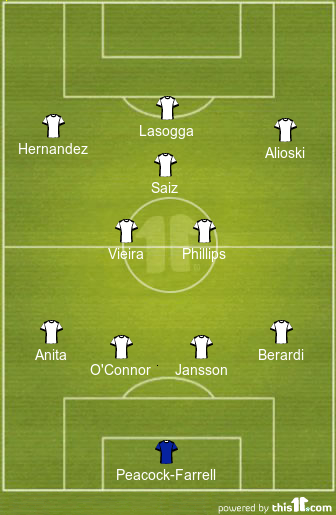 The effectivity of Viagra, or how long Viagra will last for here