The FA Cup run does not cover for the fact that Antonio Conte’s second season in England is not going according to plan. Having been knocked out of the Champions League by Barcelona just before the international break, the Blues are currently five points off a place in the top four and cannot afford to lose any more ground in the race for Champions League qualification.

They are expected to fight with Tottenham Hotspur and Liverpool for two places in the top-4 and face one of them today at Stamford Bridge. They welcome Mauricio Pochettino’s Tottenham Hotspur, who were also knocked out of the UCL before the break. This mini-derby can go a long way in deciding the fates of the clubs come the end of the season and Conte will hope that his side can use the home advantage and pull one over Spurs. Here is the predicted lineup Chelsea might field for this tie:

In team news, David Luiz and Ross Barkley are not expected to fit enough for this weekend. Thibaut Courtois picked up a niggle on international duty but should be fine for Sunday along with Andreas Christensen, who was busy during the break.

Courtois remains the first choice for Conte and should be back in action this weekend. He will start between the sticks and will surely be tested. Cesar Azpilicueta has been a regular presence at the back for Chelsea and should start on the right side of the back-3 while Antonio Rudiger, who had a fruitful time with Germany, will start on the left side.

Andreas Christensen is suffering from muscle fatigue but should be fit and is expected to keep his place at the heart of the defence for the hosts.

N’Golo Kante celebrated his birthday earlier in the week. He will love a win in this game as a present and will have to work really hard for it. He could be accompanied by Cesc Fabregas who will look to add some creativity in the midfield.

Victor Moses has been effective against teams that leave space in behind and could be the danger man for Spurs. He will start on the right flank as a wing-back while Spaniard Marcos Alonso will take up his position on the left flank.

Alvaro Morata has not yet settled into his role at the club but could lead the line this weekend, with Giroud having an eventful international break. Eden Hazard and Willian will add the creativity needed on the wings. 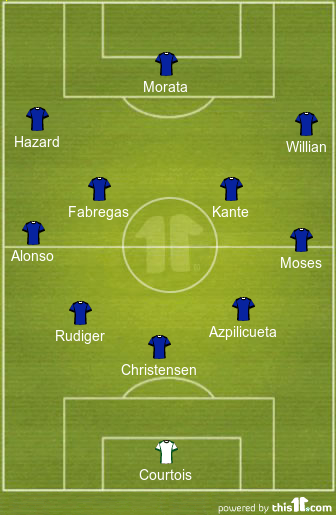 Money and freedom is the best way to change, may you be rich and continue to guide where to buy viagra cheap.