The 27th of December will be a day many Liverpool fans will remember as the club broke its transfer record, and that for a defender. The Reds finally managed to land Virgil van Dijk, albeit for a record fee of around £75m. Liverpool manager Jürgen Klopp decided not to spend on another defender after the club failed to land van Dijk in January but the Dutch international finally posed with a Liverpool shirt, which sent the fans into a frenzy.

These are seriously exciting times for Liverpool supporters, who will finally be able to see a new centre-back pairing playing regularly starting with the game against Manchester City in the league next month. But how should Klopp go about with using van Dijk? Is he walking into the first team at Anfield or will he have to prove himself in practice first?

For starters, van Dijk will start training with Liverpool after the Reds’ trip to Burnley on the 1st of January. Liverpool play Everton in the FA Cup after that, on the 5th, which could see van Dijk make his debut as a Liverpool player. In that game, he might only be partnered with the third choice centre-back but it will give the fans an idea of what he will add to the squad.

But come the 14th of January, Liverpool will have to set out their full strength squad against a rampant Manchester City side and it is widely expected that van Dijk will start that game. But who with?

At the moment, Estonian international Ragnar Klavan has been the best centre-back for Liverpool. Having made more interceptions and tackles per game than any other Liverpool defender, Klavan has been solid at the back in the 13-game unbeaten run the Reds have stitched to date and it will not be easy for Klopp to push him to the bench.

However, he only got his chance with the first team after Cameroon international Joel Matip picked up an injury. The former Schalke man was one of the best defenders in the league last season and was expected to be one of the first names on the team sheet this season for Liverpool. He is now fully fit and should start in the strongest XI for Liverpool, which makes Klopp’s job that much tougher.

It is a decent headache to have but what will please Liverpool fans is the fact that Dejan Lovren, who has been error-prone for most of his time at Anfield, is now the fourth choice at the club and this will push him to turn into a better player. To be fair, he has improved after that woeful showing against Tottenham.

The most expensive defender in the game is a sure starter for Liverpool and judging by his previous exploits, he regularly plays as the right-sided centre-back, which leaves Klavan as a good option on the left.

But Matip has shown enough discipline at the back, to get a chance alongside VVD from the start. It will be interesting to see who will play on the right side but from the Manchester City game, when everyone is fit, Liverpool should go with Virgil van Dijk and Joel Matip as their first choice partnership at the back.

This will give Joe Gomez and Alberto Moreno (when fit) or Andrew Robertson a chance to impress at both ends of the field. They are relieved partially of their defensive duties and can add more flair to this Liverpool attack.

Skipper Jordan Henderson or Emre Can could keep their place as the central midfielders and will not have as much pressure on them while Philippe Coutinho could well be relieved of his defensive duties. Adam Lallana, Oxlade Chamberlain and Georginio Wijnaldum should fight for the third midfield spot in a 4-3-3 while the front three of Mohamed Salah, Sadio Mane and Roberto Firmino can continue to strut their stuff, more efficiently.

Here is Liverpool’s strongest lineup, with Van Dijk in the starting XI: 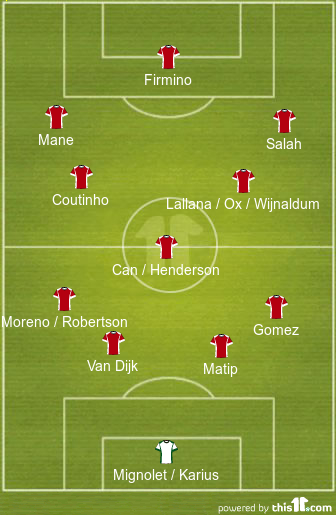 Other similar photos can be found on Reddit and Yelp, and read.