After weeks of speculation, Liverpool finally announced the signing of Mohamed Salah for an initial fee of £36.9m that could rise further. His signing eclipses that of Sadio Mane and Andy Carroll as the club record buy. Klopp’s side had signed Dominic Solanke a few weeks back and the fans were starting to become impatient as they had money to spend but there wasn’t really any transfer activity.

Signing Salah is surely a step in the right direction with the Egyptian winger being an ideal player for Klopp’s industrious approach. He is super agile, guarantees goals, assists and is a tireless worker.

Salah will easily fit into the counter-pressing philosophy of the German and has done that at Roma. Along with his style of play, Salah’s versatility is also one of the reasons why Liverpool have decided to break the bank for the 25-year old.

Salah has a knack of scoring predominantly with his left foot with 12 of his 19 goals last season coming from his left boot. His best performances are expected to be from the right wing from where he can accelerate and then cut inside to his left foot.

Sadio Mane might have to change his position in the coming season as Liverpool have two smashing players who can be deployed as inverted wingers. He was a left winger at Red Bull Salzburg where his performances had caught the eye of Klopp when he was at Borussia Dortmund.

Salah can also play on the left if required but with Adam Lallana and Philippe Coutinho in the side, there is no reason for Liverpool’s new recruit to change his original position. The 25-year old can play as a second striker which he did well at AS Roma. He played second fiddle to Edin Dzeko and formed a great understanding with the Bosnian.

With Roberto Firmino or Daniel Sturridge up top, Salah can play as the second striker and can stretch defences. His pace combined with his finishing makes him a perfect option to have as a second striker.

The formation that Jürgen Klopp will implement next season will probably be a 4-3-3 with two inverted wingers and Philippe Coutinho in midfield playing as a number 8. The back four might change as a result of incoming players with the Reds trying to sign a centre-back and a left-back this summer. So without further delay let’s have a look at how Liverpool might line up when the next season begins: 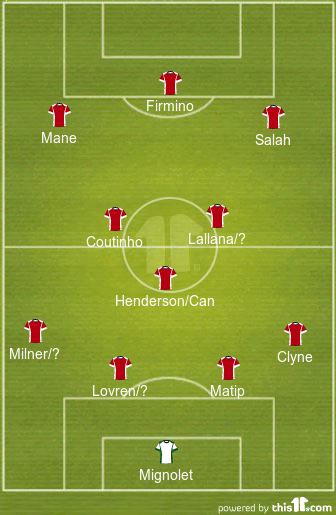