An acid test awaits in the form of Tottenham on Sunday, as Arsenal travel across town to face their bitter rivals in the North London derby in the Premier League.

Mikel Arteta’s side make the trip to Spurs in the hopes of grabbing all three points, with the potential to extend their lead at the top of the Premier League table. They were held to a 0-0 draw by Newcastle United at the Emirates Stadium last weekend but responded well with a 3-0 win over Oxford United in the FA Cup third round.

Brimming with confidence, the Gunners have to be at their best to beat Antonio Conte’s Tottenham, who registered a 4-0 win over Crystal Palace in their last league outing.

Bukayo Saka was forced off injured against Oxford United in the FA Cup but he is available to face Spurs, Mikel Arteta told in his pre-match presser. Emile Smith Rowe returned on Monday following groin surgery in September and will be in the travelling Arsenal squad on Sunday.

Aaron Ramsdale will start in goal again. He’s in good form and having been rested for the FA Cup fixture against Oxford United, the England international will feature in the North London derby.

Ahead of Ramsdale, Mikel Arteta is expected to give Oleksandr Zinchenko the nod over Kieran Tierney at left-back. Gabriel Magalhaes, William Saliba and Ben White should retain their positions at the back as usual.

Boasting one of the best defensive records in the division, the Arsenal backline have to be on their toes throughout the game to keep Harry Kane and co. at bay.

Arteta is expected to stick to the midfield pairing of Thomas Partey and Granit Xhaka. The duo of Xhaka and Partey have been excellent this season, complementing each other well in the centre of the pitch. Their focus will be to take control of the game at the earliest against Spurs. 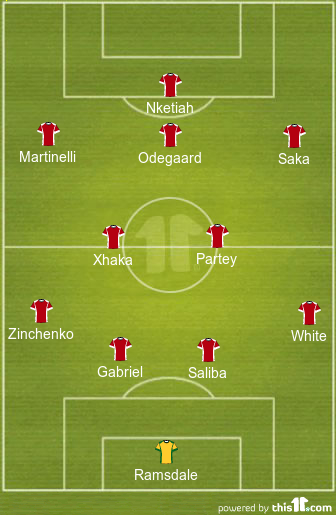 Leading from the front, Martin Odegaard is the player who shoulders the creative workload of the team. He is crucial to how Arsenal performs and will be key in unlocking the Spurs backline.

Gabriel Martinelli and Bukayo Saka’s burst of pace and dribbling skills could cause problems for the Spurs defence. They will be looking to make runs in behind the opposition’s back five and create chances in the box for Eddie Nketiah, who has performed really well in Gabriel Jesus’ injury absence.

Emile Smith Rowe and Marquinhos will be available for selection on the bench as they wait for their opportunity to catch the eye as impact substitutes if needed against Spurs.