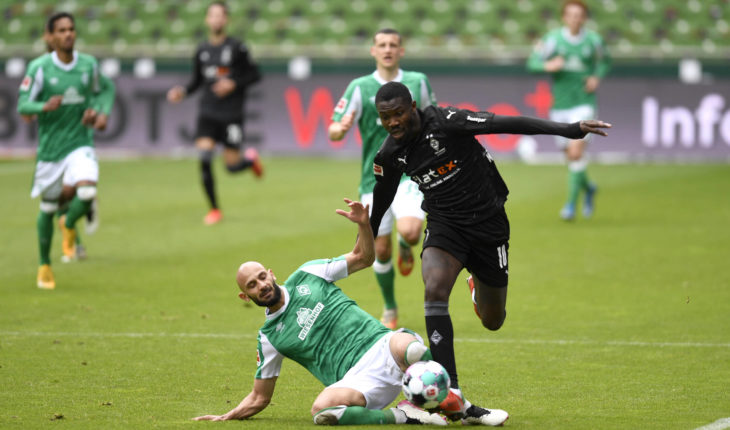 Tottenham Hotspur are interested in signing Borussia Monchengladbach attacker and French international Marcus Thuram this summer. Thuram is the son of World Cup-winning defender Lillian Thuram, and has been with Gladbach since 2019.

As per RMC Sport, Tottenham are in talks with the German side to bring the 23-year-old to North London. Thuram is being earmarked as a possible replacement for Spurs talisman Harry Kane, who could leave the club before the start of next season.

The young Frenchman joined Gladbach from Guingamp for around €12 million and has scored 25 goals and set up 21 goals in 79 games for the club. Thuram has two years remaining on his current contract with the German side.

Tottenham is yet again in a phase of transition as they will have a new manager ahead of the 2020-21 season. Spurs sacked Jose Mourinho in April but are yet to announce a replacement. The North London side could also see several players exit in the summer, with Harry Kane being the biggest name rumoured to leave the club.

Spurs will need new additions to all areas of the pitch, with the goalkeeper and full-back positions being the only ones that may not see much change. Kane’s departure would bring in a huge sum of money to help Spurs rebuild.

Kane may not be the only attacker to leave as Brazilian Lucas Moura and Dutch winger Steven Bergwijn have also been linked with a move away from the club. With Gareth Bale and Carlos Vinícius returning to their parent clubs, and Erik Lamela entering the final year of his contract, Spurs could have a new-look attack next season.

Marcus Thuram could be a decent addition to the Spurs attack as he offers versatility, speed, strength, flair and goals. The Frenchman is capable of playing out on the wing or as a striker, equally adept in both positions.

The 6’4″ attacker is superb in the air, winning an average of 2.3 aerial balls per game in the Bundesliga last season. The right-footed Thuram has loads of flair and isn’t afraid to take on players and beat them with his dribbling ability and strength. He likes to face defenders in and around the box or in wide areas, while he isn’t afraid to take shots on goal as well.

It would be unfair to compare Thuram with Harry Kane as the former is still young, has played fewer games as a striker, and is a different style of centre forward to the Englishman.

But, with a bag of tricks, strength to hold off attackers, and flair, he could be a decent signing who could develop into a top-quality forward.