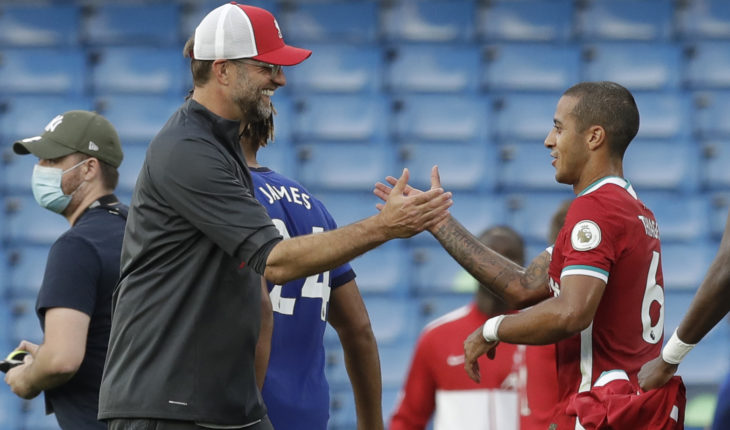 Liverpool will take on Everton in the much-anticipated Merseyside derby at Goodison Park on Saturday. The two clubs were neck to neck in the Premier League table before Liverpool’s shock defeat against Aston Villa before the international break.

Jürgen Klopp’s side will look to bounce back against their arch-rivals, but it will not be a straight-forward ask considering how well Everton have done so far under Carlo Ancelotti.

The Italian has galvanised the club after taking over last season, and with the help of some big summer signings, they look like they could challenge for the top four this season.

Liverpool will be buoyed by the return of some of their key players who missed the clash against Aston Villa. The Reds were held to a goalless draw by Everton when the two sides last faced off at Goodison Park, and will look to come away with all three points this time.

Sadio Mane and Thiago Alcantara are back for the Reds, and are in contention to make the Liverpool lineup. Jordan Henderson too is back to full fitness, and even featured for England in the UEFA Nations League.

Alex Oxlade-Chamberlain, Kostas Tsimikas, and Alisson Becker are still unavailable as they continue to recover from their respective injuries, while Naby Keita and Xherdan Shaqiri have been cleared to play after testing positive during the international break.

Adrian is likely to continue in goal, but the Spaniard can ill-afford to make any more mistakes. Caoimhín Kelleher could get a few games if Adrian isn’t solid enough at the back.

Virgil van Dijk and Joe Gomez perhaps had their worst game as a pair against Aston Villa, and they will hope to bounce back against Everton. Easier said than done, considering the Toffees’ attackers are in good form.

Trent Alexander-Arnold and Andy Robertson are expected to start as the full-backs. The duo will be up against quality players in the wide areas, and will have to be at the top of their game.

The midfield selection will be tricky against Everton. Not only will Klopp want to fortify this area of the pitch after the woeful display against Aston Villa, but he will also be wary of Everton’s quality in the middle of the park.

With the likes of Andre Gomes, Allan, and James Rodriguez in their side, Everton can keep the ball well and unlock opposition defence. Tenacity will be an important factor against Everton, so we believe Klopp could go with the trio of Jordan Henderson, Gini Wijnaldum, and Thiago Alcantara in the Liverpool lineup. 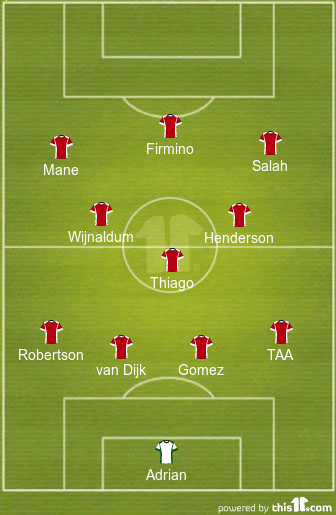 Fabinho is usually the player who features in the deeper role, but Thiago could get his full debut because of his ability to break play as well as pick out his teammates with his incredible range of passing.

Wijnaldum and Henderson are two of the best in the league when it comes to pressing and winning the loose balls, and their work ethic.

Sadio Mane hasn’t played for a while, but he is perhaps one of the best attackers in the league. It will be a tough decision for Klopp as Diogo Jota had one hell of a game for Portugal against Sweden as they didn’t feel Cristiano Ronaldo’s absence. Mane is likely to get the nod because of his experience in these games and ability to press high up the pitch.

Mohamed Salah has begun the season well, and will start on the right, while Roberto Firmino, who had a good international break with Brazil, will play as the centre forward. 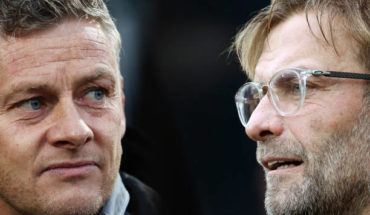