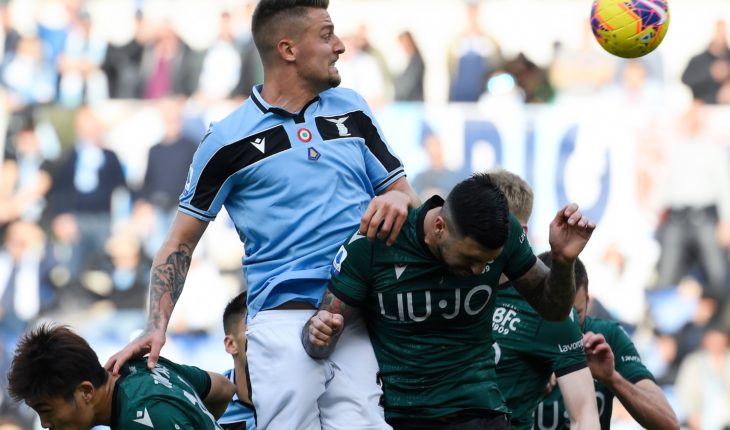 Manchester United could make a big-money move for Serbian midfielder Sergej Milinkovic-Savic, who currently plays for Serie A side Lazio. The 25-year-old has been an instrumental figure in the Italian club’s dream run in the league this season, scoring 5, assisting 7, and bossing the midfield area.

According to La Gazzetta dello Sport (via Football Italia), United are one of many top teams chasing the signature of the central midfielder. The midfielder reportedly has a release clause of around €100 million (£87 million) at the Italian club. Sergej Milinkovic-Savic has been with Lazio since 2015, racking up nearly 200 appearances for the club in all competitions.

His current deal with Lazio only expires in 2024, which puts the Italian club in the driver’s seat regarding the transfer fee. The Serbian has made 15 appearances for his national team since debuting in 2017.

Sergej Milinkovic-Savic is an exciting player, who is a versatile modern midfielder, capable of playing in various roles. Primarily a central midfielder, he can also play further forward as a No. 10, or as a deep-lying midfielder. The Serbian is a confident passer of the ball and often tries to find teammates with long balls. The tall midfielder is very good in the air, winning an average of 3.6 aerial balls per game in Serie A this season.

He also moves forward with the ball and gets into good positions in the final third, while also making clever runs into the box without the ball at his feet. Milinkovic-Savic has often been compared to Manchester United’s Paul Pogba, whose future at Old Trafford is up in the air. United have not missed Pogba over the last two months, with the likes of Fred, Nemanja Matic, and new signing Bruno Fernandes impressing. Scott McTominay is another midfielder who has had a solid season.

But, if Pogba is to leave the club at the end of the season, United have to surely sign a replacement to ensure that manager Ole Gunnar Solskjaer has quality options to choose from. Sergej Milinkovic-Savic could be the ideal replacement for Pogba as he possesses the qualities that the Frenchman brought to the table, although he hasn’t been as prolific as the former Juventus man.

The sale of Pogba would give United the budget to sign a replacement, and they should pay the €100 million release clause to bring Milinkovic-Savic to Old Trafford as he is a player with potential and would fit in United’s system giving them the boost they need to try and challenge for the title in the coming seasons.