Manchester United could only draw 1-1 in their first leg of the round of 32 Europa League tie against Club Brugge, and will hope to get the job done at Old Trafford later tonight.

The Red Devils have been on a good run of form lately, and undefeated in the last 6 games in all competitions.

Ole Gunnar Solskjaer’s side will be in confident form following their 3-0 win against Watford, with new signing Bruno Fernandes playing a starring role in the win.

Ahead of the game against Brugge, let’s take a look at the possible lineup that Solskjaer may put out.

Sergio Romero has been United’s ‘keeper for cup games, and he should once again return between the sticks and replace David de Gea.

Solskjaer played a three-man defence against Brugge in the first leg and could stick to that formation to counter Brugge’s three-man backline.

Harry Maguire is a certain starter for United at the heart of the defence, while Eric Bailly could return for his second game of the season.

Luke Shaw should play as the third centre-back, as he has done in the last few games where United have played a back three.

Diogo Dalot played the away game as the right wing-back and should return, giving Aaron Wan-Bissaka a break. Brandon Williams should start at left wing-back, having also played in the away game.

Scott McTominay should start for United in midfield, alongside Fred. McTominay will most likely replace Nemanja Matic, who has played quite a few games lately.

Bruno Fernandes, who was impressive in United’s win against Watford, should start ahead of the two midfielders in the number 10 role.

Anthony Martial and Mason Greenwood were both on the score-sheet in the win against Watford, and they should start in the match as the two main strikers. Odion Ighalo will be an option off the bench for United. 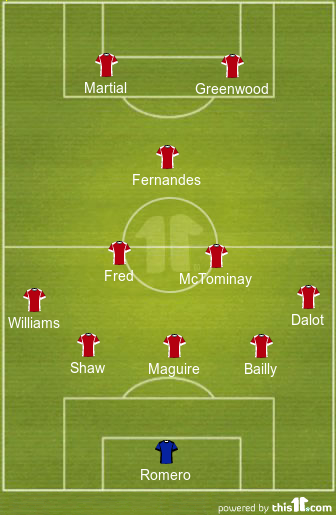