Manchester United face Wolves in the FA Cup 3rd Round replay at Old Trafford after registering a convincing win over Norwich City in the league over the weekend. The Cup game comes days before United travel to Anfield to face league leaders and arch-rivals Liverpool.

The Red Devils have had a tough run against the visitors in recent years, having not won their last five meetings in all competitions. In fact, United’s last win against Wolves came way back in 2012 when they won 5-0 in the league.

Let’s take a look at the possible Manchester United lineup against Wolves.

Paul Pogba, Scott McTominay and Marcos Rojo will all miss the game, as will Timothy Fosu-Mensah and Eric Bailly, who featured in a U23 game this past week. The game will come too soon for both players. Manager Ole Gunnar Solskjaer revealed in his press conference leading up to the game that captain Ashley Young will not be involved, perhaps due to his current transfer situation.

Luke Shaw will also miss out due to a hamstring injury, while Solskjaer hinted at giving rest to Marcus Rashford, who was hauled off in the 60th minute in the game against Norwich City.

Sergio Romero played in the game at Molineux and he could return to the Manchester United lineup for the replay.

Solskjaer does not have too many options in central defence which means that Harry Maguire and Victor Lindelof will continue at the back. Luke Shaw’s injury concerns mean that Brandon Williams – who had a fine game against Norwich – will continue at left-back.

Aaron Wan-Bissaka played last time around at right-back, and he could continue. But, with the game against Liverpool just days away, Solskjaer could also start Diogo Dalot, who was a late substitute at Molineux.

Fred and Nemanja Matic are the only two fit competitive options in the middle of the park, and they should continue with Juan Mata playing in the No. 10 role in the Manchester United lineup. Mata had a fine game against Norwich City, registering two assists.

Daniel James replaced Rashford in the league, and he could take the Englishman’s place in the side, while Anthony Martial plays up top. Mason Greenwood could replace Andreas Pereira on the right for United for the FA Cup game. 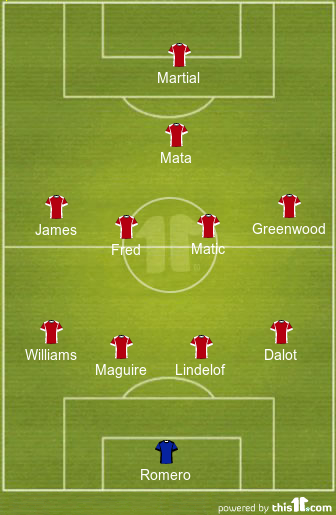