Tottenham Hotspur will travel to Germany to face Bayern Munich in a dead rubber tie as both sides have qualified for the knockout phases of the Champions League.

The English side head into the game in good form, having defeated Burnley 5-0 on Saturday, while the hosts have lost their last two league games.

In the reverse fixture, Bayern mauled Spurs 7-2, but the game will be a lot closer this time around.

Jose Mourinho is going to most likely rest a whole host of first-team players for this game. Mourinho has revealed that Harry Kane will not be involved in the game, while the likes of Kyle Walker-Peters, Oliver Skipp, Ryan Sessegnon, and Troy Parrott could all play in the game.

Goalkeepers Hugo Lloris and Michel Vorm will not be involved in the game, while Harry Winks and Tanguy Ndombélé are doubts for the game. Erik Lamela will also not make the Tottenham lineup, while Ben Davies is another doubt.

Let’s take a look at the possible Tottenham team for the game against Bayern Munich:

Paulo Gazzaniga could continue in goal for this game against Bayern Munich due to the injury to the other two senior goalkeepers. 21-year-old Alfie Whiteman is an option as well.

Juan Foyth could start in the centre-back, having not got a run of games since Mourinho took charge. He could be joined in the heart of the defence by Davinson Sánchez.

Kyle Walker-Peters could return to the side at right-back, while Danny Rose could replace Jan Vertonghen at left-back for Spurs.

Eric Dier will most likely start in midfield alongside another young academy product, Oliver Skipp.

Giovani Lo Celso could complete the three-man midfield for Spurs against Bayern Munich. Moussa Sissoko could be given a rest for this game, while Harry Winks is still not ready for action yet.

17-year-old Irish striker Troy Parrott could get a start – his first Champions League start. Ryan Sessegnon, who was a second half substitute in the win over Burnley, could feature on the left.

Christian Eriksen could play as the No. 10, drifting in from the right, for Spurs on Wednesday night. 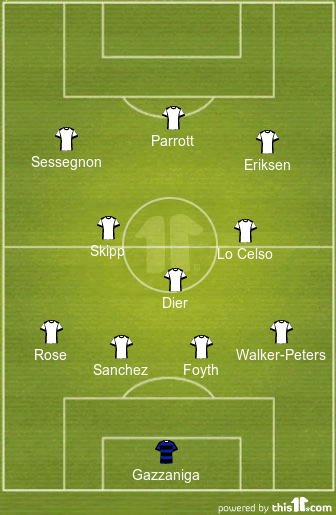