Manchester United will return to Premier League action when they take on struggling Newcastle United at St James’ Park on Sunday.

The Red Devils had yet another disappointing away performance at AZ Alkmaar on Thursday night in the Europa League, with the English side not registering even a single shot on goal.

United are tenth in the league, with nine points from seven games, and haven’t won in 10 away games. Ole Gunnar Solskjaer’s side run the risk of dropping into the bottom half of the table if they lose against Newcastle United on Sunday.

The side will have several key players missing for Sunday’s game through injury, which will be a major concern for Solskjaer.

Aaron Wan-Bissaka is a doubt for the game against Newcastle United. Left-back Luke Shaw is certain to miss the game against the Magpies, so Solskjaer could be without his first-choice full-back duo.

Paul Pogba’s ankle injury will keep him out of the game, while Jesse Lingard has a hamstring issue which will see him miss out.

Let’s take a look at the possible Manchester United lineup against Newcastle United:

David de Gea started the Europa League game against AZ Alkmaar, and he will continue in goal against Newcastle United.

Victor Lindelof played the entire 90 minutes against Alkmaar, and he will most likely continue at the back, playing alongside Harry Maguire in the Manchester United lineup.

If Wan-Bissaka misses the game, we could see Ashley Young return to right-back – the position he played in against Arsenal on Monday night.

We could see Axel Tuanzebe play at left-back, just like he did against Arsenal in the Premier League.

Brandon Williams played at left-back against Alkmaar, and was probably United’s best player. He could be an outside choice for the left-back slot.

Fred could start in Pogba’s place in central midfield against Newcastle United, partnering Scott McTominay in the middle, who scored the only goal for United against Arsenal.

Juan Mata, who played against AZ Alkmaar, will start in the No. 10 role for United. 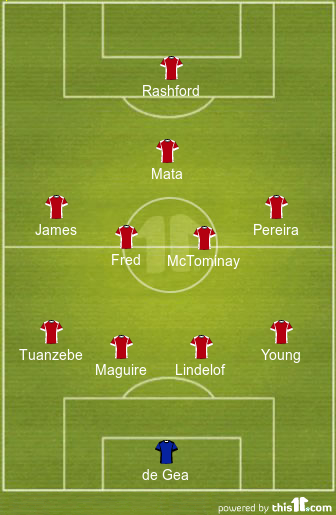