Following their 1-0 win over Newcastle United last weekend, Arsenal will host Burnley at the Emirates Stadium on Saturday in their second Premier League fixture.

The Gunners were far from their best against Steve Bruce’s side, but it’s still early days and they will get better once the new signings acclimatise to their surroundings.

Burnley began their campaign on a winning note, and will certainly be no pushovers come Saturday.

Granit Xhaka suffered a bruising in the win against the Magpies, and a late call will be made on him. Emile Smith Rowe is still out with a groin injury and will not feature this weekend.

Kieran Tierney, Hector Bellerin and Konstantinos Mavropanos will also not be available as the three defenders are receiving treatment and are being assessed. They are anticipated to be back in full training in October.

Rob Holding has started to participate in full training following his recovery from a knee injury. However, the English defender is unlikely to feature for a few more weeks as he is yet to regain full fitness.

Sead Kolasinac and Mesut Ozil are also unlikely to feature, though Emery has aid that the duo are in a better condition mentally.

Bernd Leno is the first-choice custodian for the north London outfit and he is set to start in goal. Ainsley Maitland-Niles and Nacho Monreal could start as full-backs.

In the heart of the backline, Calum Chambers and Sokratis are likely to be chalked once again as Emery might not tend to rush David Luiz into the starting lineup.

Dani Ceballos could get the nod to start in central midfield at the expense of Joe Willock. Ceballos will look to unlock Burnley’s stubborn defence with his vision and passing.

Alongside the Spaniard, we expect Lucas Torreira and Matteo Guendouzi to start in the central midfield. Both of them have good work-rate, which will be crucial in stopping Burnley on the break.

As a precautionary measure, Alexandre Lacazette was an unused substitute during Arsenal’s trip to St. James’ Park, but the Frenchman is likely to start up top against the Clarets.

Nicolas Pepe could come in for Henrikh Mkhitaryan on the right-wing, while Pierre-Emerick Aubameyang could start on the other flank to complete Arsenal’s deadly attacking trio. 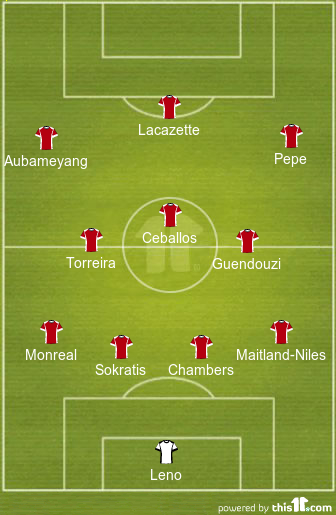