Manchester United are on their pre-season tour and will play their final game in Australia, against Leeds United on 17th July. The Red Devils won their first game of the tour against Perth Glory, with second-half goals from Marcus Rashford and James Garner sealing the deal.

Manager Ole Gunnar Solskjaer will experiment and try more players in different combinations in the second game of pre-season as the Red Devils step up their fitness ahead of an important Premier League season.

David de Gea was the only player in the squad for the first game in the tour against Perth Glory who did not get a run out. Solskjaer confirmed that we will see the Spaniard in action against Leeds United.

Chris Smalling was one of the 12 substitutes to come on in the second half of the game against Perth, and there is a possibility that he will start as one of the two centre-backs against Leeds, and he may be joined by Victor Lindelof in defence, who had missed the first game of the tour.

Aaron Wan-Bissaka had a solid start to his Manchester United career when he came on in the second half against Perth, and he will most likely get his first start against Leeds, while the slight knock to left-back Luke Shaw could see Marcos Rojo play at left-back for the Red Devils.

The speculation around Paul Pogba’s future continues, but he did play in United’s first game of the tour when he came on as a second-half substitute. We could see the World Cup-winning Frenchman start against Leeds United, and he could be joined by 18-year-old midfielder James Garner, who scored United’s second goal against Perth.

Another United homegrown player, Angel Gomes, could play as the most advanced midfielder, and try to exploit gaps between the Leeds midfield and defence.

Solskjaer revealed that Romelu Lukaku, who has been linked with a move away from United, is fit and will play against Leeds, but I don’t think he will start, with Marcus Rashford, who was on the scoresheet last time around, likelier to start the game.

Mason Greenwood, too, played in the second half against Perth Glory, and we could see him get an opportunity, interchanging with Rashford on the right. New signing Daniel James was lively in the first game of the tour when he started off the left, and Solskjaer could be tempted to see how the new signing links up with Rashford. 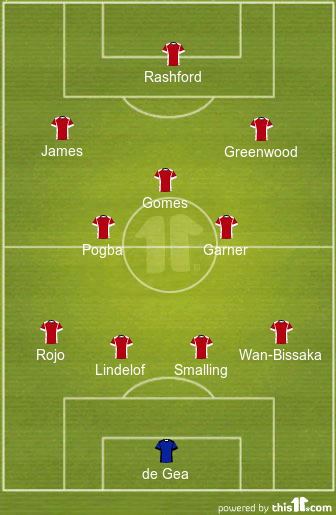