Leicester City, after an impressive second half of the season under new manager Brendan Rodgers, will be looking to take their good form into the next season. The Foxes’ main striker, Jamie Vardy, had another great year, finishing the campaign with 18 goals in the Premier League – 5th on the list of most goals scored in the league.

But, Leicester lack depth in that position with Kelechi Iheanacho failing to impress since his move from Manchester City. Reports have now emerged that Leicester are in the race to sign RB Leipzig forward Jean-Kévin Augustin. The French striker has played second fiddle to Timo Werner in the side this season, with limited opportunities coming his way.

And now it looks like Augustin, who joined the German team in 2017 from Paris Saint-Germain, may leave the club in the summer to get more first-team football. The report suggests that the Frenchman will be available for around €20 million (£17.5m) in the summer.

What will Jean-Kévin Augustin bring to Leicester City?

The 21-year-old forward is a quick player who can get in behind the opposition defence and could be a potent weapon in counter-attacking situations. Augustin is not just a player who uses his immense pace to bully the opposition but also plays useful passes when in forward areas. The French player’s key strengths are his quickness with the ball, dribbling, and his eye for a pass.

In the 24 appearances that he made for the German club this season, he started just 11 times, scoring 6 goals in the campaign, while he had scored 12 times in his first season at the club.

Augustin can also play as a winger out on the right-hand side but is primarily a striker. With Shinji Okazaki set to leave the club and Kelechi Iheanacho scoring just twice in the 2018-19 season for Leicester, Rodgers needs another striker in the squad who can provide competition to 32-year-old Jamie Vardy.

Leicester City have been linked with a few attacking players since the end of the season. Hull City’s Jarrod Bowen, who had a phenomenal year, could move up to the Premier League with Leicester, while winger Jordan Ibe, who worked with Brendan Rodgers at Liverpool, has also been linked with a switch to the Foxes. 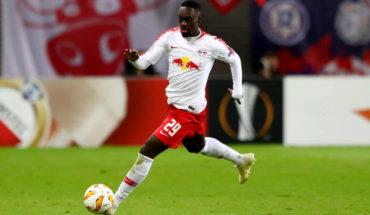