Liverpool have a potentially tricky game against Cardiff City late today as they look to return to the top of the Premier League table.

Manchester City’s win against Tottenham Hotspur on Saturday has put a bit of pressure on Liverpool, and considering Cardiff are in a survival battle, it is going to be a close game.

Liverpool are a team in form, though, and have won their last eight games in all competitions, so Jürgen Klopp’s side will be fairly confident of another win.

Alex Oxlade-Chamberlain and Joe Gomez’s returns have boosted Liverpool, but it is unlikely we will see the duo start against Cardiff City.

Both might feature on the bench, however, and depdning on the situation, may get a few minutes late in the game.

The Liverpool defence came under the cosh a few times against Chelsea and Porto, but did well in the end. Joel Matip and Virgil van Dijk should keep their place at the back. Gomez’s return means Matip will have to be more assertive in everything he does.

Andy Robertson and Trent Alexander-Arnold have a total of 16 assists between themselves, and will look to provide the width and create chances once again from the wings against Cardiff. Alisson will keep his place in goal, and should expect a lot of aerial duels considering Cardiff’s style.

Naby Keita and Jordan Henderson are expected to return to the starting lineup against Cardiff. The two were on the bench during the clash against Porto.

Henderson came off the bench to assist Roberto Firmino for his goal, and is in a good run of form after being deployed in a more advanced role. The same can be said of Keita, who has stepped up his game in the last couple of weeks.

Fabinho should keep his place in the team and play as the holding midfielder.

No changes here, as the trio of Mohamed Salah, Firmino, and Sadio Mane should continue in attack. All three are in form at the moment as the Liverpool fans couldn’t have asked for more with a handful of games remaining. 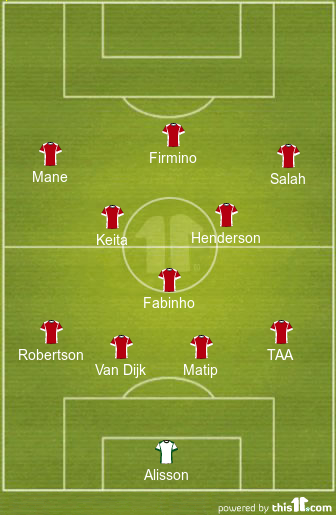