It has been quite a topsy-turvy campaign for Arsenal under new coach Unai Emery and with three-fourths of the season done and dusted, it’s time the Spaniard focuses on his objectives as we head into the final phase of the campaign.

Securing Champions League qualification will be the main target for Arsenal and in this article, we will figure out the strongest possible Gunners’ lineup for the rest of the season.

Bernd Leno, despite his fair share of criticism, has come up with some excellent saves throughout this season and the German definitely seems the better choice than veteran ‘keeper Petr Cech, who has made only seven league appearances so far.

Hector Bellerin has been ruled out for the rest of the campaign and considering the poor performances from Shkodran Mustafi and Stephan Lichtsteiner, the Emirates’ cult-hero Carl Jenkinson is apparently the best fit in the right-back slot while Nacho Monreal should be deployed over Sead Kolasinac on the opposite flank.

Laurent Koscielny’s return from injury has offered Emery additional options in defence and the Frenchman is definitely a better option when compared to Mustafi.

Koscielny will be partnered by Sokratis at the heart of the four-man Arsenal backline. The Greek international has arguably been the best Arsenal defender this season and his presence at the back will be important throughout the remainder of the campaign.

Lucas Torreira is a guaranteed starter in midfield, thanks to his excellent work ethic and willingness to press the opposition that has certainly revamped the Arsenal midfield department this season.

He will be partnered by Granit Xhaka in the double pivot even though the Swiss definitely needs to improve his game, with Matteo Guendouzi and Denis Suarez pushing for the starting eleven, week in week out.

Henrikh Mkhitaryan has looked lively since returning from injury and is definitely an upgrade over Alex Iwobi in the right wing position while Aaron Ramsey should start over Mesut Ozil in the lone attacking midfield slot.

The Welshman’s creativity and mobility in the final third have been crucial this season, although the main focus will be on the exceptional offensive duo of Pierre-Emerick Aubameyang and Alexandre Lacazette.

Aubameyang will be deployed on the left-wing slot while Lacazette should be tasked with the responsibility of leading the Arsenal attack. Iwobi is an additional option for Emery, should he opt to utilize Aubameyang as number nine. 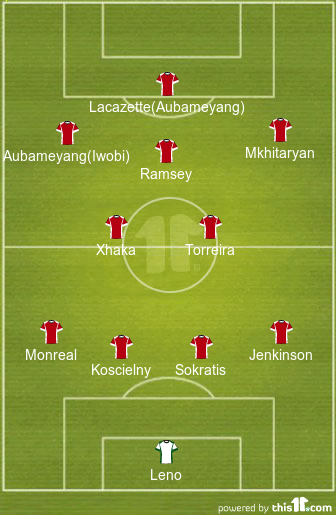 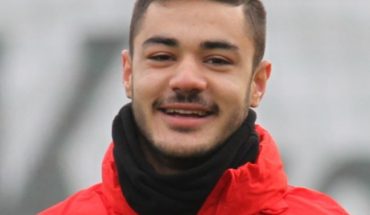