Manchester United will look to ride over the minor setback they faced against Burnley in the midweek fixture and get back to winning ways when they travel to the King Power Stadium to face Leicester City tomorrow.

United’s dawdling season received a shot in the arm with Ole Gunnar Solskjaer’s appointment and the mid-season revival of the Red Devils has put unprecedented pressure on the likes of Chelsea and Arsenal in their race to clinch a place in the Top 4.

The draw against the Clarets has resulted in United falling two points behind but with Arsenal facing Manchester City, there is every possibility that the Gunners might find themselves in the 6th spot by the end of the matchweek.

But it is not going to be a cakewalk for Paul Pogba and co with the Foxes on a high after taking points off table-toppers Liverpool in their last fixture. Leicester have also inflicted defeats upon Manchester City and Chelsea and thus will be out to do a Manchester double.

Ole Gunnar Solskjaer appeared confident of Paul Pogba and Anthony Martial’s availability on Sunday even though the latter is likely to make the bench. Marcus Rojo remains out while Marouane Fellaini is no longer a Manchester United player after finalising a move to China.

David de Gea will start in goal. He has well and truly got his mojo back and will pose a stern test for the likes of Jamie Vardy and James Maddison.

Ashley Young looks likely to carry on at right-back even though Diogo Dalot and Antonio Valencia will be pushing for starts.

Victor Lindelof looks to be United’s first choice centre-back under Ole and is set to start. But Phil Jones might have to make way for Chris Smalling who was on the bench against Burnley after an injury lay-off.

Luke Shaw should retain his place at left-back.

Ander Herrera has started all four away games under Ole and is in line to return in place of Andreas Perreira.

The manager sounded confident of Paul Pogba‘s availability while Nemanja Matic will take his usual place at the base of the midfield.

Juan Mata and Romelu Lukaku were not particularly impressive in their starts against Burnley and are likely to make way. Anthony Martial might have to settle for a place of the bench which will see Alexis Sanchez make a rare start on the left-wing.

Marcus Rashford should move to his preferred role down the middle while Jesse Lingard is expected to start on the right. 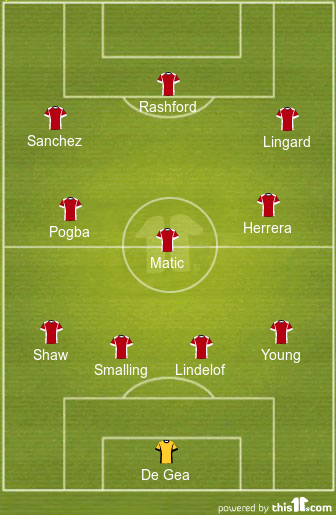 Viagra prescriptions best place, you can run an anti-virus scan on your device to make sure it is not infected with malware.