Home
LEAGUES
English Premier League
Arsenal
Arsenal to face competition for AC Milan superstar: Why they can’t miss out on him

Arsenal have a crucial summer transfer window coming up after the season as Unai Emery needs to strengthen in quite a few areas, and the Gunners have reportedly been linked with a move for Franck Kessié.

The north Londoners have had defensive problems so far this season, but their midfield has flattered to deceive as well, and hasn’t been able to provide the protection that the defenders need.

Kessié has been monitored by Arsenal, but according to Calciomercato, the Gunners will face competition from PSG for the Ivory Coast international.

The 22-year old’s contract expires in the summer of 2021, and the club might be forced to sell him in the coming summer for a fee of € 30 million, according to the same report.

Kessié has had a stellar spell with AC Milan, and even though the Rossoneri haven’t been able to challenge for the title or make it to the Champions League, the Ivorian’s performances in midfield have earned him quite a few plaudits.

Primarily a central midfielder, Kessié likes going forward on the transitions, and has mustered three goals in 21 Serie A appearances so far this season so far.

Kessie’s passing at the centre of the pitch has helped Milan in their build-up play, as the player has managed a pass accuracy of 88.7% and has averaged at least one key pass per game.

It’s worth noting that Kessié isn’t a natural defensive midfielder, so he needs to be utilised alongside someone like Lucas Torreira to bring out the best in him. He can put in a tackle when needed, though.

Why Arsenal can’t afford to miss out on Franck Kessie

Kessié is a handful on the transition, and because his passing is pretty strong, he’d be a good fit under Emery’s system which focuses on build-up play from the back.

The Spaniard’s style focuses on patient build-up, and for Arsenal to efficiently implement that, they need strong players like Kessié who can not only pass the ball around with authority, but also put a foot in when needed.

Still only 22, Kessié would be a smart addition and form a midfield pivot alongside Torreira that can be a long-term solution.

Kessié has spent nearly three seasons in the Italian top flight, which is a pretty competitive league, so it’s unlikely that he would struggle in the Premier League. 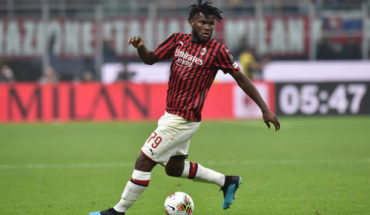