Manchester City will look to extend their 22-game unbeaten streak against Newcastle United when they face Rafa Benitez’s men in today’s midweek fixture.

Pep has masterminded a comeback after the mini-slump in December and will look to cut the 4-point gap with Liverpool to one with the Reds not playing until Wednesday. City have scored goals for fun once again this season and last week’s 5-0 hammering of Burnley took their goals scored tally to a whopping 108 in all competitions.

Newcastle United are likely to adopt a similar approach to the ones they have been employing since Benitez’s appointment and the Blues will most likely have to dig deep into their superlative creative crevice to unlock the defensive web Rafa will spin.

Pep’s injury worries have eased a considerable extent. Vincent Kompany remains out with a muscle problem while Claudio Bravo is a long-term absentee.

Ederson is a nailed-on starter in goal. He has struggled to keep clean sheets this season but his passing and distribution have been top notch.

Danilo has worked his way into Pep’s first team reckoning but with City playing Arsenal, Everton and Chelsea next week, today might be the ideal occasion to give him a rest. Kyle Walker is set to continue at right-back as he bids to recapture his form.

In case Danilo is rested, the attack-minded Oleksandr Zinchenko should get a start at left-back.

Aymeric Laporte was rested against Burnley and should start against the Magpies. John Stones will be pushing for a recall but the presence of Salomon Rondon might make Pep select the aerially more secure Nicolas Otamendi alongside the Frenchman.

Fernandinho should start at the base of the midfield 3. The Brazilian’s workload has been managed but maybe not as much as it should be. Nevertheless, Pep stressed on his importance against teams like Burnley and Newcastle United which might signify his presence in the starting XI.

Kevin de Bruyne‘s match sharpness has expectedly improved in recent games and he will be pushing to have another go from the beginning of the game. David Silva is likely to complete the midfield trio with Ilkay Gundogan, Bernardo Silva and Phil Foden providing further options.

Pep is likely to select a completely changed front three. Leroy Sane and Raheem Sterling should start on the flanks after getting much-deserved rests in the two cup games. Sergio Aguero‘s phenomenal record (14 goals in 12 games in the Premier League) against the Magpies is lost on none and he should start in place of Gabriel Jesus. 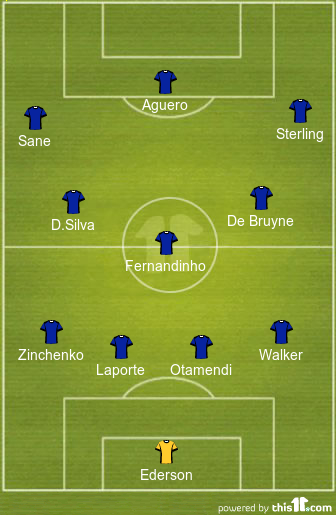