After losing the first leg of the EFL Cup semi-final against Tottenham Hotspur, Chelsea will look to return to winning ways when they host Newcastle United on Saturday.

The Blues are currently fourth and a win could be imperative for Maurizio Sarri’s men, especially with Arsenal breathing down their neck.

Cesc Fabregas is ruled out due to a “mental condition” and with a move away from Stamford Bridge imminent, he has likely played his last game for the club.

Ruben Loftus-Cheek remains the other absentee for the Blues while Alvaro Morata is expected to recover after a minor hamstring injury. He is a slight doubt going into this fixture, though.

Following a disappointing 1-0 defeat to Tottenham Hotspur in midweek, Sarri will revert to his trusted defensive duo of David Luiz and Antonio Rudiger. They will be deployed at the heart of the Chelsea defence as they look to keep out Newcastle this weekend.

Sarri may also shuffle the fullbacks after a long time. A wake-up call for the Spanish duo of Azpilicueta and Alonso might well see Sarri choose Davide Zappacosta and Emerson ahead of them. Though the chances are slim, a change will not come as a massive surprise.

Kepa Arrizabalaga will remain in goal as he searches for his 11th clean sheet of the season.

Minimal changes are expected in midfield, with Sarri likely to stick with his trusted midfield duo of N’Golo Kante and Jorginho, both of whom started against Tottenham.

Jorginho, having attained a sensational passing accuracy of 90% this season, will be key in recycling possession while Kante will be tasked with the responsibility of getting rid of loose balls as well as providing additional support to the attack. The Frenchman leads the team in terms of interceptions and for obvious reasons.

Mateo Kovacic, on the other hand, may return to the starting lineup, replacing Ross Barkley in midfield. The Croatian’s ability to carry and work the ball in half spaces will be important against a side like Newcastle.

With both Chelsea attackers struggling to find the back of the net on a regular basis, Eden Hazard may once again start as the false 9.

The Belgian international has already netted 10 goals in 20 matches and will be keen to extend his tally against a lowly Newcastle defence.

Hazard is likely to be partnered by the wide-duo of Willian and Pedro, who will replace Callum-Hudson Odoi as the right winger. 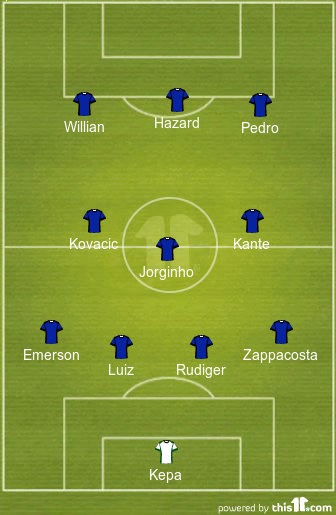