Manchester United will face an in-form Arsenal team looking to avoid a defeat which can send Jose Mourinho’s team two places down to 10th.

The Portuguese tactician has had a torrid season thus far. It will be difficult to dig up any widespread coverage of United from Jose’s point of view in a positive light and this, along with the results on the pitch point towards a collective discord within the club.

But we won’t be dwelling on this aspect in this article. With the all-important match to commence in a few hours time, we will try to decipher the starting XI Jose might roll out today.

While the atmosphere is not wholly joyous at Old Trafford right now, United actually have been extremely dominant at home in the last year or so. Out of the last 38 matches they have played in the Premier League in their own backyard, the Red Devils have not been beaten in 35 of those.

In the current context, this is certainly an encouraging sign. Jose will back himself to chalk out a strategy to make sure Arsenal don’t have it all their way tonight.

Jose has categorically refused to share any sort of update regarding team news in his latest press conference. Hence, there will be a certain amount of second-guessing involved.

In the confirmed absentees, Ashley Young takes his place alongside Alexis Sanchez and Victor Lindelof who are out due to injuries while the Englishman will be serving a one-match ban due to 5 accumulated yellows.

David de Gea will start in goal. The Spaniard hasn’t been at his best but has still managed to shine through on a few occasions. Tonight will be another test of his current season form.

With doubts over the participation of Antonio Valencia and Matteo Darmian, we expect a full debut for Diogo Dalot. He has had enough feelers and needs to be handed this challenge. In central defence, Jose will not have the luxury to choose from players who are 100% fit. We expect Chris Smalling and Phil Jones to play through the pain barrier. Selecting the likes of Matic and McTominay in such a fixture could yield disastrous results and should be avoided.

Luke Shaw has been deemed a doubt but we expect him to start with Young suspended.

Paul Pogba was shockingly poor against Arsenal but he should start. On his day, he can very well be the best player on any football pitch and this is a perfect opportunity to bounce back and make a point.

Ander Herrera has the legs and the urgency needed in such a match and should start in place of Nemanja Matic in central midfield. Fred is expected to complete the midfield trio. The Brazilian hasn’t yet made an impression in the Premier League and this will be another opportunity for him to do so.

Romelu Lukaku broke his goal drought against Southampton but did nothing other than that. Marcus Rashford should lead the line while Jesse Lingard and Anthony Martial should take up either flank. Lingard’s work-rate and penchant for the spectacular might come in handy while Martial’s form will be United’s best hope going into the match. 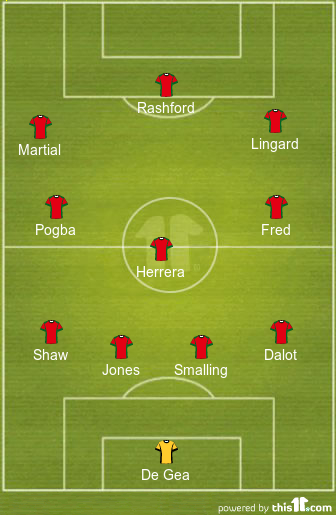