Arsenal have bounced back well after losing their opening two games of the Premier League season under new manager Unai Emery. The Spaniard saw his team pick up back to back wins against West Ham and Cardiff before the international break.

Emery is still figuring out what his best starting XI is and we take a look at what the strongest lineup could be judging from Arsenal’s performances in the last month or so.

Arsenal should definitely hand new signing Bernd Leno his first opportunity to shine with Petr Cech looking completely out of sorts in this early parts of the season.

Leno is yet to make his Premier League debut after moving to Emirates earlier this summer. He could be an interesting option between the sticks.

Arsenal don’t have many options when it comes to the back four with club captain Laurent Koscielny and dynamic fullback Sead Kolasinac both side-lined with their respective injuries. As a result, Sokratis and Shkodran Mustafi are still Arsenal’s best centre-half pairing at the moment.

Spanish duo of Hector Bellerin and Nacho Monreal should remain in the starting eleven as Arsenal don’t really have any options barring Lichtsteiner. Bellerin, in particular, averages two interceptions per game and could become an asset under Emery this season.

Matteo Guendouzi has impressed after arriving from Lorient earlier this summer. In the first four games this season, the Frenchman has averaged 2.5 interceptions and.8 tackles – more than any other player at the club.

It seems Emery trusts Granit Xhaka quite a lot. In truth, Xhaka has failed to live up to the expectations this season.

The former Gladbach midfielder has committed too many mistakes and new signing Lucas Torreira looks like he could add a lot more dynamism and discipline to the midfield. The Uruguayan has hardly featured after making a big-money this summer.

The World Cup star has the potential and could turn out to be an excellent partner for Guendouzi in midfield. The duo will be aided by the services of Aaron Ramsey in a slightly advanced position.

Though far-fetched, Arsenal could become much more devastating if they line up with both Pierre-Emerick Aubameyang and Alexandre Lacazette. But, since that is unlikely, especially with the likes of Mesut Ozil and Henrikh Mkhitaryan waiting in the wings, Aubameyang should be tasked with the responsibility of leading the Gunners attack.

The Gabon International will be partnered by the wide-duo of Mkhitaryan and Ozil. Lacazette has impressed this season, but against tougher opposition, Arsenal will need balance in attack, something offered by Ozil and Mkhitaryan. 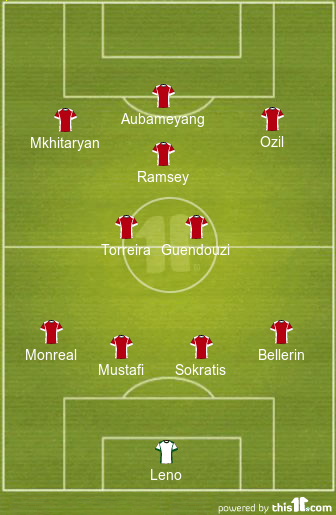 I really like what you guys tend to be up too. This kind of clever work and reporting more!