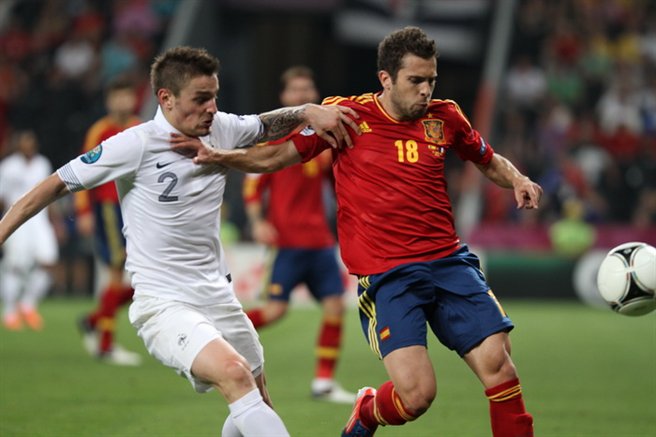 FC Barcelona might again have messed up their Champions League ambitions but had a good domestic season. The Catalan team lifted the La Liga and the Cope del Rey, and Ernesto Valverde had a huge role in improving the performances by some tactical changes in the setup.

Jordi Alba is one of the players who have immense this season, as the Spaniard has been a constant source of attacking moves down the left flank for FCB.

Recent reports indicate that Chelsea are eyeing to make a move for the veteran fullback, as they assume that their defensive issues need to be resolved completely.

With Chelsea aiming to upgrade their performances after finishing out of the top 4 spots this season, the board seems to be intent to rope in some good players who can propel them in this ever-increasing nature of the Premier League.

Alba: One of the best fullbacks

Jordi Alba had an uncharacteristically poor season in the 2016/17 campaign but that did not deter the player from improving his performances this time around. Alba is a quick fullback, someone who can manage to balance the attacking and defensive duties admirably well. He overlaps the flank well and gets into decent positions to send in crosses into the box.

Moreover, Alba is very incisive yet precise with the ball at his feet. He is a good passer of the ball and gradually drifts inside to shift the play to the centre at times.

Alba is good at finding teammates and has an excellent vision for a wide player. According to Squawka, Alba played in 29 La Liga games and scored twice whilst having assisted eight goals too.

He averaged a passing accuracy of 86% and was decisive whenever he had possession of the ball near the opposition’s box. Alba has won 41% of his defensive duels and has registered 65% successful take-ons too. Majority of his defensive actions come via clearances and blocks, and he manages the defensive and offensive aspects of his game quite well