Wolverhampton Wanderers are cruising towards the Championship title and after a 2-0 win over Derby County earlier this week, Wolves are due to host Birmingham City at the Molineux Stadium on Sunday.

The Blues haven’t really been convincing in the league this season and thus, Nuno Espirito’s men are set to enter the game as the favourites. Wolves, however, aren’t expected to be complacent in any manner whatsoever.

Espirito Santo has all his key players available.

Here is how we expect the manager to roll out his starting XI against Garry Monk’s men.

John Ruddy has been the undisputed first choice custodian in the league for Wolves this season. In 42 games in the Championship, the 31-year-old shot-stopper has notched up 21 clean sheets, making 1.83 saves per game on an average, and certainly deserves to start in the upcoming fixture.

Espirito Santo has relied heavily on Conor Coady, Willy Boly and Ryan Bennett to cater to his defensive needs and the trio have stepped up brilliantly. Coady, Boly and Bennett possess really strong physicality and have read the attacking endeavours of the opposition in a meticulous fashion more often than not.

Wolves must be aiming to bulldoze past their opponents in the business end of the season to steer their way to the Premier League by satisfyingly stamping their strong dominance in the English second division. Thus, to keep their defensive solidity intact, we expect these three to be rolled out yet again to face Monk’s men tomorrow.

Matt Doherty and Barry Douglas have been flawless more often than not from the wingback slots as they have been able to knit a fine balance between their defensive and offensive duties. While Doherty is expected to be placed at right-wingback, Douglas is set to keep his place at left-wingback.

Ruben Neves is likely to be placed alongside Alfred N’Diaye in the middle of the park. Although Romain Saiss was used in the last league fixture, the Portuguese gaffer shouldn’t really mind rotating his squad a bit and give N’Diaye some game time which he thoroughly deserves.

Benik Afobe is expected to get the green light to lead the line. Afobe is a strong attacker and has the required pace and predatory instincts in front of the goal. While Diogo Jota is expected to start from the left-wing, Helder Costa might get the nod to start instead of Ivan Cavaleiro from the right-wing. 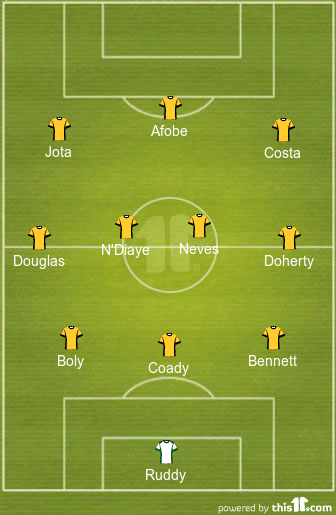 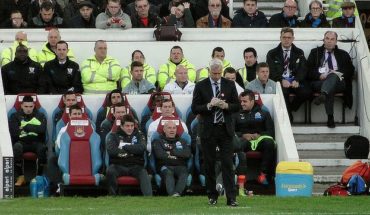