After a disappointing loss to league leaders Wolves, Leeds United have fallen into the 13th place in the points table, 36 games into the season. They have now won just one of their last 12 Championship games and will look to bounce back this weekend when they travel to Madejski Stadium to take on a Reading side, who are currently sitting in the 18th place in the league table.

The Royals have failed to win any of their last six games in the Championship but playing at home, they will be confident of taking a result from this tie. Paul Heckingbottom’s men cannot afford to lose any more ground if they are to at least finish in the top half of the table and here is the predicted lineup he might field for this tie:

Leeds will be without the services of defender Liam Cooper, who picked up a knock against Wolves in the last game. Kemar Roofe is yet to return to training and will also miss this game while Tyler Roberts, Conor Shaughnessy and Luke Ayling are all also ruled out for this tie.

Felix Wiedwald was dropped from the first team for the game against Wolves but Farrell has not done enough to warrant another start, which could see Wiedwald take his place in the side for this weekend. In the absence of Liam Cooper, Pontus Jansson will act as the senior centre-back in this tie and should be partnered with Matthew Pennington, who covered for him even in the game against Wolves.

Vurnon Anita remains a regular presence at the back at right back and he will retain his place in the side, along with Gaetano Berardi starting at left-back as usual.

Kalvin Phillips remains one of the most important players for Leeds and needs to have a good game if they are to take anything from this trip to Reading. He might be partnered with Eunan O’Kane, who was an unused substitute in the game against Wolves.

Samuel Saiz has done well in the no.10 role this season for Leeds and should keep his place in the side while Pierre-Michel Lasogga should lead the attack for the visitors this weekend.

Stuart Dallas did not have his best game against the league leaders but is an important part of the squad and should start on the right flank while Ezgjan Alioski is expected to keep his place on the left flank in the attack. 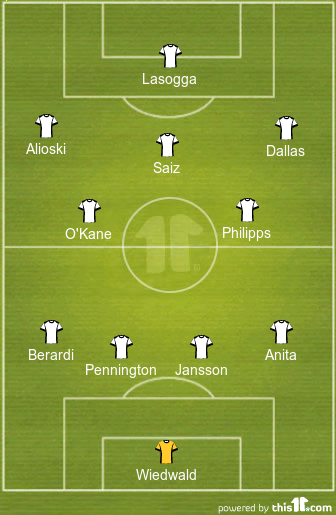