After a slump not so long ago, Mauricio Pochettino’s men managed to get their act back together and have now picked up 16 points from their last seven games in the domestic league. However, they are fresh from a 1-1 draw against West Ham United and will look to get back to winning ways, when they welcome Sam Allardyce’s Everton to Wembley this weekend.

The Toffees are smarting from a loss to Manchester United at home but have been generally hard to beat under their new manager. Spurs are three points outside the top-4 in the points table and will need all three points from this game to stay in the hunt. But it will not be a stroll and they will have to work really hard to catch up with Liverpool in the 4th place. Here is the predicted lineup Pochettino might field for this tie:

The Lilywhites do not have too many injury issues to worry about, ahead of this game. While defenders Danny Rose and Toby Alderweireld are both ruled out of this game, midfielder Harry Winks, who was absent for almost a month, with an ankle injury, is finally back in training. However, none of them is expected to play any role in this game. The manager has shifted to a 4-man backline recently and is expected to stick with it yet again.

French international Hugo Lloris has been in decent form in goal for Spurs and remains the first choice for Pochettino. He should retain his place under the bar against Everton. With Alderweireld out injured, Jan Vertonghen has taken up the role as the senior CB at the back and should start this game alongside the young Davinson Sanchez, who has been impressive this season.

With Rose out injured, Pochettino has no choice but to use Ben Davies at left-back while Serge Aurier’s creativity might be chosen over Kieran Trippier’s defensive approach at right-back.

Belgian playmaker Mousa Dembele is one of the most important players in the side for Pochettino and he is expected to start this game. Young Harry Winks is out injured while Moussa Sissoko has just not been impressive enough for the manager’s liking, leaving English international Eric Dier to team up with Dembele in the middle of the park for Spurs, in this clash.

Record-breaking striker Harry Kane has been in sensational form this season and will continue to lead the side while goal scorer in the game against West Ham, Heung Min-Son will add pace and industry to this attack, on the left flank.

English starlet Dele Alli, who is slowly finding some form, will start in the no.10 role while Christian Eriksen, who needs to start finding the back of the net, will start on the right flank. 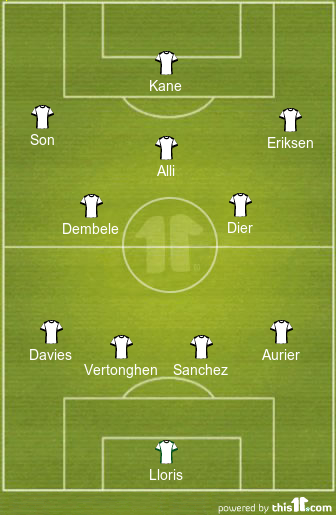