Home
LEAGUES
English Premier League
Arsenal
Manchester City And Arsenal Poised To Pull Off The Transfer Of The Summer: Fair Deal For Both?

Manchester City were one of the busiest teams in the transfer market this summer as they have already spent over £200m on summer recruits but Pep Guardiola is still looking to add quality to his first team and is looking to add one of the most established players in England in Alexis Sanchez.

The Chilean international had an inconsistent stint at Camp Nou before he was picked up by Arsene Wenger and in his three years at the club, he has turned into one of the best playmakers in Europe. However, the lack of progress at the Emirates has seen him reject a contract extension with the club and with the deadline day approaching, he is widely expected to leave.

The Gunners are still adamant that he is not for sale but there are a number of clubs who are expressing interest in the player. Pep Guardiola, who has already worked with Sanchez at Barcelona, is currently leading the pack for his signature.

The Spanish manager has added Bernardo Silva to his attacking midfield already but is now intent on signing Sanchez and is ready to do what it takes to land him. Reports earlier claimed that City are ready to offer former Liverpool winger Raheem Sterling as a part of the deal but Arsenal are holding out for Sergio Aguero. 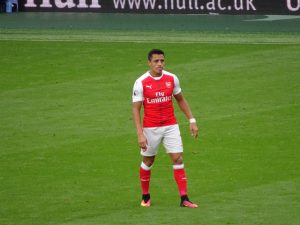 The Argentine hitman is easily one of the best strikers in world football at the moment and has been in impeccable form for City for more than three years now.

He is still the first choice striker for Pep Guardiola but has had to compete with Gabriel Jesus for his place in the first team. But his productivity in front of goal is right up there with the best and his 183 league appearances in England will add enough quality and experience to the Arsenal side, to help them get back to their best.

With two losses already, the Gunners are in dire straits at the moment and need things to happen quickly. They have failed to land their top transfer targets and are finally looking at adding one of the best strikers in Europe.

Lack of Champions League football will be a hindrance in convincing Aguero to move but with the Gunners showing interest in the striker previously as well, this might be the right time for them to lure him to the Emirates. But at 29, is he the right man?

Cindy Whitehead, to allow for those treatments to enter the market generic viagra.