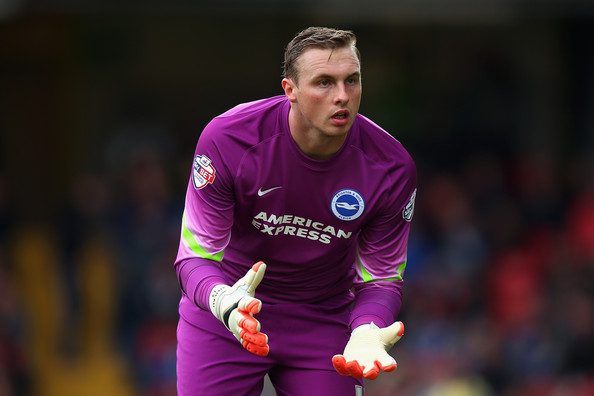 With 53 points to their name, Birmingham City managed to escape from the clutches of the relegation zone by a whisker as they finished 19th in the Championship table. However, even after failing to clinch a promotion to the Premier League (or even putting forth a strong case to do so), the Blues jotted down a smashing deal lately, as they signed David Stockdale from Brighton & Hove Albion.

Stockdale was one of the most instrumental figures for the Seagulls last term in their promotion winning season. Under the tutelage of Chris Hughton, Albion failed to clinch the English second tier silverware but that doesn’t take away the credits they thoroughly earned for emerging as one of the most productive clubs in England.

They competed on every frontier and it goes with saying that they handsomely earned the right to ply their trade against the elite clubs of the country.

Nonetheless, Hughton has lost one of the vital members of his squad as the 31-year-old goalkeeper opted to reject a lucrative deal which was offered to him by Albion and signed a three-year deal with Harry Redknapp’s outfit.

Stockdale’s decision of moving to the St. Andrew’s from the Falmer Stadium definitely comes as a surprise to the football fraternity, considering the fact that his stocks had risen massively and a player of his calibre must have stayed on to make a statement in the English top flight.

The former Fulham goalie was resilient and brilliant with the gloves for Hughton as the first-choice goalkeeper under the former Norwich City manager. He mustered 41 appearances, and in the process, he managed as many as 18 clean sheets and made 97 saves in the Championship last season. He was named both in the EFL as well as PFA Championship Team of the Year for his consistency between the sticks throughout the last campaign.

At Birmingham City, it is hard not to presume that he would be their no. 1 goalkeeper, with the likes of Tomasz Kuszczak, Connal Trueman and Adam Legzdins offering competition for a place in Redknapp’s starting line-up.

Stockdale’s compelling attributes such as ball distribution, confidence in dealing with crosses and barking orders to the defenders will be precious to the former Jordan manager and his experience will undoubtedly come handy as his new employers will look forward to competing for a top-six finish next season.

If you have symptoms of ED more